Paperback (208 pages), audiobook
What happened that morning in the skies over Los Angeles is still an unexplained mystery that remains open to speculation and accusations of a cover-up. 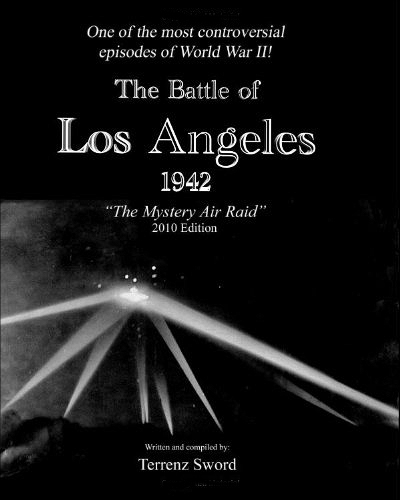 On December 7, 1942, the Japanese attacked Pearl Harbor, and the United States of America entered a state of war. During the following weeks, the West Coast would experience several "blackouts." The Army issued statements insisting that the threat of an air raid was real. Ground observers reported sightings of unidentified planes, and signals were picked up on a new top-secret device called "radar", from Alaska, to the Mexican border. There were several submarine attacks off our Pacific Coast, during this same period. On Monday night, February 23rd, 1942, while President Roosevelt was speaking to the nation on by radio, a large Japanese submarine surfaced and shelled an oil refinery in Santa Barbara. That Tuesday night, the unidentified planes returned.

At approximately 2:00 am Wednesday morning, February 25th, another blackout was ordered in the Southern California area. Searchlights scanned the sky, and this time anti-aircraft guns, protecting the vital aircraft and shipbuilding factories, went into action. In the next few hours, they would fire over 1,400 three-by-twelve-inch shells at an unidentified, slow-moving object in the sky over Los Angeles that looked like a "blimp or a balloon." By Thursday, the incident became clouded in mystery.

Were there planes in the sky? Where did they come from? Why were none shot down? Why were no bombs dropped? Was it just a weather balloon? Was it a case of jittery nerves? Or was it something we could not shoot down? This incident served as confirmation that the Japanese, and other "potential enemy aliens" should be rounded up, evacuated, and interned in "concentration camps."

Today, almost 70 years later, what happened that night is still unexplained. Until now, the incident was largely forgotten, or reduced to a few pages in several books and magazines, including official histories of WWII., in which it is still considered a mystery. This may be one of the most important stories of the 20th century! Has this controversial mystery finally been solved?

This new "illustrated edition" has over 60 additional pages, including a shocking revelation, guaranteed to stir the controversy regarding this event, for decades to come. This is the author's definitive edition, not to be confused with the flawed "Inner Light / Global Communications edition, for with the author received no royalties.

The Battle of Los Angeles...