Paperback (320 pages), kindle
There was only one point in WWII when Nazi Germany had a chance of winning: October 1941, when most of the Soviet forces before Moscow had been smashed or encircled. Down by 12 runs in the 2nd inning, the all but defeated Red Army continued with fierce determination. And thanks to an arrogant manager, there would be no joy in Reich-ville. 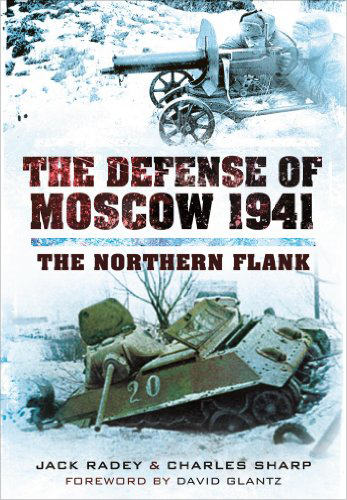 There was only one point in the Second World War when Nazi Germany had a chance of winning. That point was October 1941, when most of the Red Army’s forces before Moscow had been smashed or encircled, and no reserves were available to defend the capital. All that stood in Hitler's way were a handful of Soviet rifle divisions, tank brigades and hastily assembled militia.

According to German accounts, their spearheads were stopped by the mud, but a close examination of German records shows this was not so. Instead it is clear that it was the resistance of the Red Army and bad, arrogant planning that halted the Wehrmacht. This is the dramatic story that Jack Radey and Charles Sharp tell in this compelling study of a previously unknown part of the Battle of Moscow. Using archival records from both sides, they reveal how the Soviets inflicted a stunning defeat on a German plan to encircle six Soviet armies the middle of October 1941.

Jack Radey has researched deeply into the history of the Second World War in general and has made a particular study of the conflict on the Eastern Front. He has written many games, articles and film scripts on subjects as wide ranging as the Korsun Pocket, Borodino ’41, American Civil War battlefields, D-Day, Iwo Jima, and Barbarossa.

Charles Sharp has a long-standing interest in military history. He spent twenty years in the US Army from the Vietnam War. He served in the army through the end of the Cold War and the first Iraq War, retiring in 1992. Since then he has written fifteen books on the Soviet and German armies in the Second World War, published in the Soviet Order of Battle series, and lectured on military history.

The Battle of Moscow...