1951, DVD
Released six years after the end of WWII, is a solemnly respectful tribute to Erwin Rommel, Germany's most celebrated military genius. 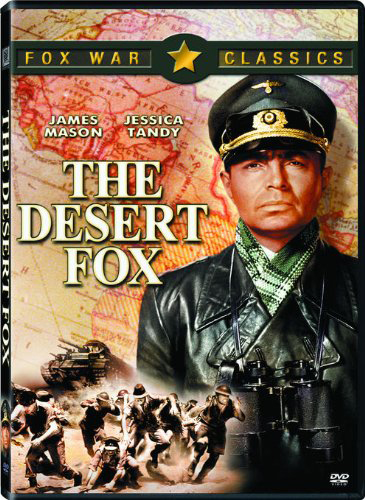 James Mason delivers a strong performance in this fascinating portrait of Field Marshal Erwin Rommel. In the early 1940's, Rommel's juggernaut Afrika Korps dominated North Africa. But as the tide turned and he came to the painful realization that his Fuhrer, to whom he hd sworn allegiance, was destroying Germany, his ingrained sense of duty pushed him into a conspiracy against Hitler. Co-starring Jessica Tandy as Rommel's wife and Cedric Hardwicke as another anti-Hitler conspirator, The Desert Fox is an intimate look at one of the most respected military tacticians of modern times.What a difference a few years can make.

The Desert Fox, released six years after the end of World War II, is a solemnly respectful tribute to Erwin Rommel, Germany's most celebrated military genius. James Mason's portrayal of this gallant warrior became a highlight of his career iconography. The film itself is oddly disjointed: a pre-credit commando raid to liquidate Rommel is followed by a flashback to the field-marshal's lightning successes commanding the Afrika Korps—-a compressed account via documentary footage and copious narration (spoken by Michael Rennie, who also dubs Desmond Young, the Rommel biographer and onetime British POW appearing briefly as himself). The dramatic core is Rommel's growing disenchantment with Hitler (Luther Adler), his involvement in the plot to assassinate der Führer, and his subsequent martyrdom. Mason's Rommel returned two years later for a flamboyant, mostly German-speaking cameo in The Desert Rats, a prequel focusing on the battle for Tobruk. --Richard T. Jameson