Hardcover (862 pages), paperback
A Third Reich reference book, arranged by topic, gives insight into the twisted madman's regime and his speeches that mesmerized so many. 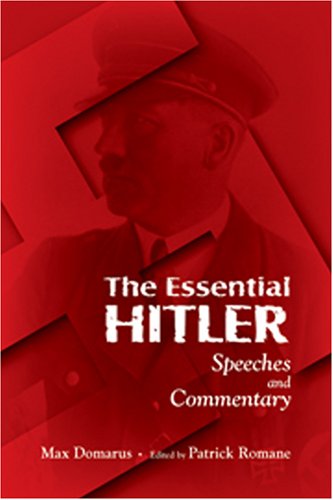 For readers interested in the Third Reich, the Holocaust, Nazism, and genocides. Taken from Hitler: Speeches and Proclamations, 1932 1945, a four-volume set, this 850+ page abridgement is arranged by topic:

A topical index is included. There is no other abridgement of Hitler's Speeches and Proclamations, 1932-1945. There is no larger commentary or more extensive notes.

This title abridges the four-volume English translation of Domarus' magnum opus, organized topically. It is in release concurrently with a new eBook The Complete Hitler: A Digital Desktop Reference (978-0-86516-658-5) of the entire original work in English and German in searchable PDF format.