The Execution of Private Slovik

Paperback (256 pages)
Hundreds of soldiers were tried for desertion during WWII and sentenced to die, but only Eddie Slovik paid the price - the only American soldier executed for desertion since the Civil War. 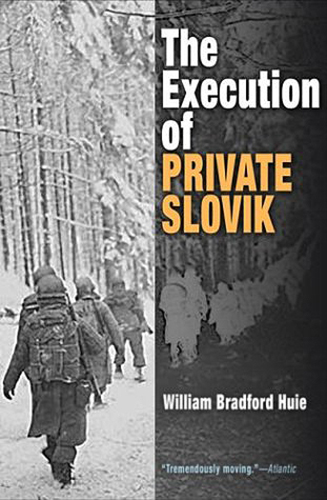 In late August 1944, a drab convoy of raw recruits destined to join elements of the decimated 28th Division lumbered along a windy French road strewn with dead animals, shattered bodies, and burning equipment. The invasion of Europe was in full swing, with German forces hastily retreating in face of the Allied assault. Throughout 1944, with mounting casualties worldwide, the United States draft dug deeper for infantrymen, including those who were previously considered unfit for service. One of those draftees traveling through the carnage in the French countryside was 24-year-old Eddie Slovik, a petty thief from Detroit who had spent his youth in and out of reform schools. Eddie’s luck had recently changed, however, with a steady factory job and marriage to Antoinette, a beautiful girl who gave Eddie hope and security for the first time in his life. But their honeymoon—like that of many other newlyweds during World War II—was interrupted by the call to service... Coming under intense artillery fire, the troops were ordered to jump and dig foxholes. In the morning, Eddie Slovik and a friend found themselves alone.

Separated from his unit, Slovik joined a Canadian outfit and traveled with them for six weeks, cooking and cleaning for them, before finally reporting to the 28th Division. He carried a rifle but no ammunition. He was assigned to a platoon but walked away. Refusing to fight, Slovik was arrested, court martialed, and condemned to death. Hundreds of soldiers were tried for desertion during World War II and sentenced to die, but only Eddie Slovik paid the price, supposedly as a deterrent, yet word of the nature of his death was never officially released.

In The Execution of Private Slovik, considered to be among the best investigative books ever written, William Bradford Huie reconstructs this entire story in order to find out what made Eddie Slovik an unlikely pacifist and why the U.S. Army decided to cover up the affair. With the full cooperation of the Department of the Army, including the officers in charge of the court martial, and through interviews of persons who knew Slovik and the hundreds of letters that he sent to his wife, Huie reveals how Slovik’s case reached General Eisenhower at the moment when American troops were reeling from a sudden massive German counterattack that jeopardized their hard won advances. Slovik seemed resigned to his fate and, despite a written plea for clemency, Eisenhower approved the sentence. In Eddie Slovik, the author finds a hard luck depression era boy, good natured, poorly educated, who when faced with the reality of war realized that he simply could not kill another human being. M! ilitary justice was carried out and those involved remain steadfast in their belief that the right thing was done, but Huie shows that, in death, Eddie Slovik has much more to tell Americans about life and duty to one’s country.