Kindle only (~42 pages)
Hitler denounced Hess as a madman who had stolen a plane while in the grip of a delusion in order to "broker peace." The German nation, to whom he had been something of a hero, abruptly disowned him. 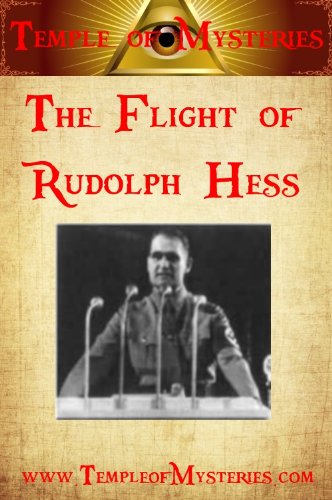 Few mysteries of recent times have the power to seize the imagination like that of Rudolf Hess, Hitler's Deputy, who flew to Scotland alone and unarmed in the middle of the Second World War in order to broker peace.

Arrested ignominiously by the Home Guard - 'Dad's Army' - Hess was imprisoned, all the while protesting that he had come to meet the Duke of Hamilton, Scotland's Premier Peer and, Hess believed, the leader of an aristocratic peace party. Meanwhile, Hitler denounced him as a madman who had stolen a plane while in the grip of a delusion, and the German nation, to whom he had been something of a hero, abruptly disowned him.

After spending the rest of the war confined in Britain, Hess was taken to the Nuremberg War Crimes Trials and sentenced to life imprisonment in Spandau Prison, Berlin. It was there that he died, apparently by his own hand, in August 1987, aged 93, after over twenty years as the sole prisoner in the jail.

Suspicions that there is more to the Hess affair than the official explanation are inevitable when the enormous secrecy and obvious cover-ups surrounding the Hess affair are taken into account. Although understandable during the war, the Hess files were kept closed under a special 75-year rule, which were not due to be opened until 2017. Under pressure following Hess's death in 1987, the Government did agree to their early release in 1992, but even then a few files were held back because, according to Foreign Minister Douglas Hurd, they 'still pose a risk to national security'.

Even a brief glance at the details of the story prompts any researcher worth their salt to pose dozens of questions. These are just some of them:

What was Rudolf Hess's true role in the rise to power of the Nazis, and what was the real extent of his influence in the Third Reich? Was he Hitler's ineffective yes-man - or a real power to be reckoned with?

What was the purpose of Rudolf Hess's flight in May 1941? Which of the many theories put forward to explain this astonishing event is correct? Did Hitler know about - and even approve of - his plan, despite his denials when it all went wrong?

Has the full story surrounding Hess's capture been told? Did he have accomplices in high places in Britain - and did the RAF deliberately allow his plane to fly unmolested over Britain?

Was Hess right about the existence of an aristocratic peace party - and had they arranged to meet him that night? If so, who were its members? Why has the Hess affair been hushed up, and why is it obviously still deemed too sensational to be made public?

Did Hess bring peace proposals, particularly terms that the British could have taken seriously? And if he did, what happened to this historic document?

Does the theory - first made public by surgeon Hugh Thomas - that the man who died in Spandau was not Rudolf Hess but a double bear close scrutiny? If it does, what became of the real Deputy Führer? And how was a double persuaded to undertake Hess's terrible fate?

This eBook is the complete and ad-free written works on The Flight of Rudolf Hess from MysteriesofWarfare.com