The Last Stand of the Tin Can Sailors:

Paperback (499 pages), kindle, audiobook
The men, the strategies, and the sacrifices that turned certain defeat of the Battle off Samar into a legendary naval victory. 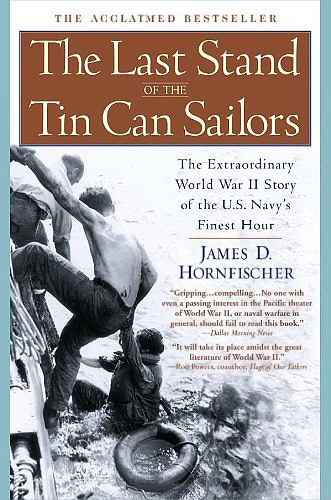 "This will be a fight against overwhelming odds from which survival cannot be expected. We will do what damage we can."

With these words, Lieutenant Commander Robert W. Copeland addressed the crew of the destroyer escort USS Samuel B. Roberts on the morning of October 25, 1944, off the Philippine Island of Samar. On the horizon loomed the mightiest ships of the Japanese navy, a massive fleet that represented the last hope of a staggering empire. All that stood between it and Douglas MacArthur’ s vulnerable invasion force were the Roberts and the other small ships of a tiny American flotilla poised to charge into history.

In the tradition of the #1 New York Times bestseller Flags of Our Fathers, James D. Hornfischer paints an unprecedented portrait of the Battle off Samar, a naval engagement unlike any other in U.S. history — and captures with unforgettable intensity the men, the strategies, and the sacrifices that turned certain defeat into a legendary victory.