The Most Noble Adventure:

The Marshall Plan and How America Helped Rebuild Europe

Paperback (464 pages), kindle
A character-driven history that tells the story of the Marshall Plan, the unprecedented and audacious policy through which America helped rebuild war-ravaged Western Europe. 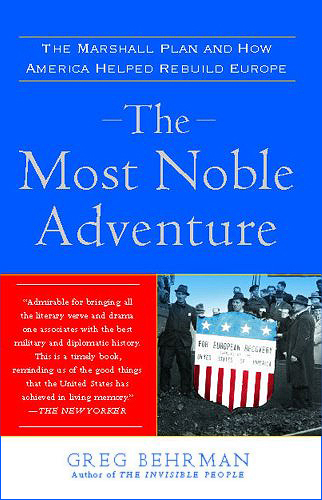 In this landmark, character-driven history, Greg Behrman tells the story of the Marshall Plan, the unprecedented and audacious policy through which America helped rebuild World War II-ravaged Western Europe. With nuanced, vivid prose, Behrman recreates the story of a unique American enterprise that was at once strategic, altruistic and stunningly effective, and of a time when America stood as a beacon of generosity and moral leadership.

When World War II ended in Europe, the continent lay in tatters. Tens of millions of people had been killed. Ancient cities had been demolished. The economic, financial and commercial foundations of Europe were in shambles. Western Europe's Communist parties -- feeding off people's want and despair -- were flourishing as, to the east, Stalin's Soviet Union emerged as the sole superpower on the continent.

The Marshall Plan was a four-year, $13 billion (more than $100 billion in today's dollars) plan to provide assistance for Europe's economic recovery. More than an aid program, it sought to modernize Western Europe's economies and launch them on a path to prosperity and integration; to restore Western Europe's faith in democracy and capitalism; to enmesh the region firmly in a Western economic association and eventually a military alliance. It was the linchpin of America's strategy to meet the Soviet threat. It helped to trigger the Cold War and, eventually, to win it.

Through detailed and exhaustive research, Behrman brings this vital and dramatic epoch to life and animates the personalities that shaped it. The narrative follows the six extraordinary American statesmen -- George Marshall, Will Clayton, Arthur Vandenberg, Richard Bissell, Paul Hoffman and W. Averell Harriman -- who devised and implemented the Plan, as well as some of the century's most important personalities -- Winston Churchill, Josef Stalin, Joseph McCarthy -- who are also central players in the drama told here.

More than a humanitarian endeavor, the Marshall Plan was one of the most effective foreign policies in all of American history, in large part because, as Behrman writes, it was born and executed in a time when American "foreign policy was defined by its national interests and the very best of ideals."