The Rape of Europa:

Paperback (512 pages), kindle
From da Vinci to Picasso, the Third Reich's war on European culture and the Allies' desperate effort to preserve it. 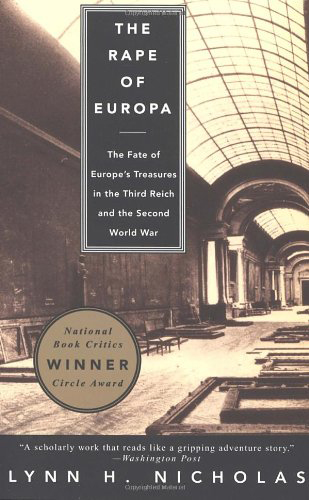 The cast of characters includes Hitler and Goering, Gertrude Stein and Marc Chagall -- not to mention works by artists from Leonardo da Vinci to Pablo Picasso. And the story told in this superbly researched and suspenseful book is that of the Third Reich's war on European culture and the Allies' desperate effort to preserve it.

From the Nazi purges of "Degenerate Art" and Goering's shopping sprees in occupied Paris to the perilous journey of the Mona Lisa from Paris and the painstaking reclamation of the priceless treasures of liberated Italy, The Rape of Europa is a sweeping narrative of greed, philistinism, and heroism that combines superlative scholarship with a compelling drama.Every few months you'll read a newspaper story of the discovery of some long-lost art treasure hidden away in a German basement or a Russian attic: a Cranach, a Holbein, even, not long ago, a da Vinci. Such treasures ended up far from the museums and churches in which they once hung, taken as war loot by Allied and Axis soldiers alike. Thousands of important pieces have never been recovered. Lynn Nicholas offers an astonishingly good account of the wholesale ravaging of European art during World War II, of how teams of international experts have worked to recover lost masterpieces in the war's aftermath and of how governments "are still negotiating the restitution of objects held by their respective nations."