The Third Reich at War

Paperback (944 pages), kindle, audiobook
The dynamics of a society rushing headlong to self-destruction and taking its citizens down with it, plunging all Germans into war at every level. 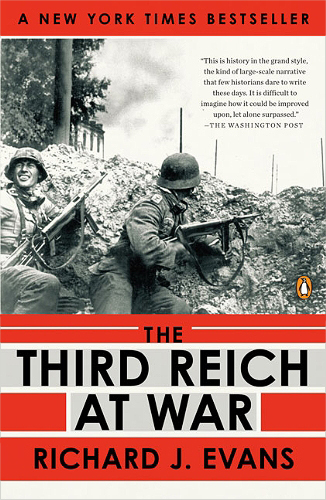 An absorbing, revelatory, and definitive account of one of the greatest tragedies in human history.

Adroitly blending narrative, description, and analysis, Richard J. Evans portrays a society rushing headlong to self-destruction and taking much of Europe with it. Interweaving a broad narrative of the war's progress from a wide range of people, Evans reveals the dynamics of a society plunged into war at every level. The great battles and events of the conflict are here, but just as telling is Evans's re- creation of the daily experience of ordinary Germans in wartime.

At the center of the book is the Nazi extermi­nation of the Jews. The final book in Richard J. Evan's three-volume history of Hitler's Germany, hailed "a masterpiece" by The New York Times, The Third Reich at War lays bare the most momentous and tragic years of the Nazi regime.