A Film By Ken Burns and Lynn Novick

DVD - 6 discs
Ken Burns has definitely succeeded in breaking new ground, exploring in depth the effect of the war on common Americans, and not just the soldiers of The Greatest Generation that fought it. As the narration says at the beginning, "The war affected people in every house, on every street in every town in America." 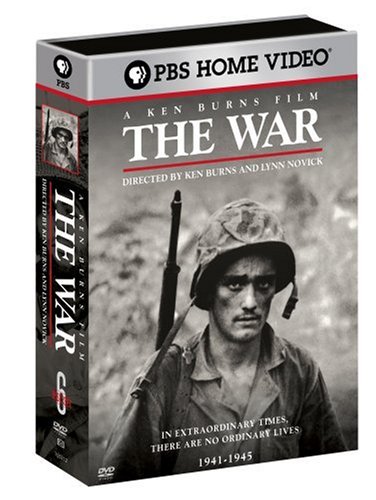 The War is a seven - episode series, produced by Ken Burns and Lynn Novick, that examines the myriad ways in which the Second World War touched the lives of every family on every street in every town in America. By telling the stories of ordinary people in four quintessentially American towns – Waterbury, Connecticut; Mobile, Alabama; Sacramento, California; and the tiny farming town of Luverne, Minnesota – the series portrays this enormous worldwide catastrophe on an intimate, human scale.

The War intertwines vivid eyewitness accounts of the harrowing realities of life on the front lines with reminiscences of Americans who never left their home towns, and who tried their best to carry on with the business of daily life while their fathers and brothers and sons were overseas. The film honors and celebrates the bravery, endurance, and sacrifice, of the generation of Americans who lived through what will always be known simply as The War.

Creating epic documentaries about war is nothing new for Ken Burns, nor is the subject of the Second World War, which never ceases to be a popular subject of films and TV shows. Yet with The War, Burns has definitely succeeded in breaking new ground, exploring in depth the effect of the war on common Americans, and not just the soldiers of The Greatest Generation that fought it. As the narration says at the beginning, "The war affected people in every house, on every street in every town in America." This is nothing less than an attempt to show how the war altered the lives of an entire nation through the portrayal of four individuals from four communities--Waterbury, Connecticut; Mobile, Alambama; Luverne, Minnesota; and Sacramento, California--that could represent any town in the country that went through the war. The result is another stunning achievement for Burns and co-director Lynn Novick. Together the filmmaking team succeeds in bringing the war home through the testimonies, letters, and footage of the people from these towns.

The storytelling is compelling--Burns and Novick manage to find the most vivid, intimate, and personal dimensions of a global catastrophe--and brought to life with exceptional voice work from marquee stars like Tom Hanks, Alan Arkin, and Samuel L. Jackson. Much of the footage is brilliantly restored; even the most die-hard History Channel buff will see clips here that they've never viewed before. Many old grainy family films look almost as clean and bright as if they were just shot using a modern camera with black-and-white film (keeping in mind that most of the footage was shot without sound, the audio effects work on The War is particularly impressive and should bring attention to the underappreciated work of the foley artist).

It took Burns and Novick six years to make this seven-part, 15-hour film--not surprising, really, considering the miles of footage they must have accumulated in the course of their research--and the time and effort shows in the results. The DVD also includes a making-of featurette, deleted scenes, extensive commentaries, and more, in addition to a companion book, The War: An Intimate History. --Daniel Vancini