Paperback (299 pages), kindle, audiobook
Acclaimed author Stephen Ambrose carries us along in the crowded and dangerous B-24 Liberators as their crews fought to destroy the German war machine during World War II. 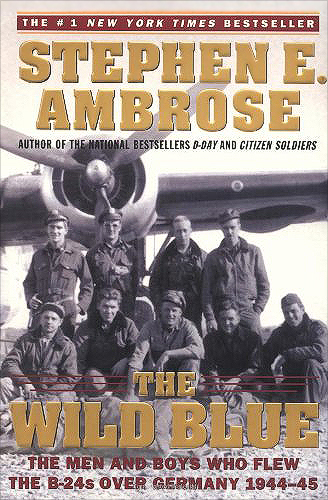 Stephen E. Ambrose, acclaimed author of Band of Brothers and Undaunted Courage, carries us along in the crowded and dangerous B-24s as their crews fought to destroy the German war machine during World War II.

The young men who flew the B-24s over Germany in World War II fought against horrific odds, and, in The Wild Blue, Ambrose recounts their extraordinary heroism, skill, daring, and comradeship with vivid detail and affection.

Ambrose describes how the Army Air Forces recruited, trained, and selected the elite few who would undertake the most demanding and dangerous jobs in the war. These are the boys—turned pilots, bombardiers, navigators, and gunners of the B-24s—who suffered over fifty percent casualties.

With his remarkable gift for bringing alive the action and tension of combat, Ambrose carries us along in the crowded, uncomfortable, and dangerous B-24s as their crews fought to the death through thick black smoke and deadly flak to reach their targets and destroy the German war machine. Twenty-two-year-old George McGovern, who was to become a United States senator and a presidential candidate, flew thirty-five combat missions (all the Army would allow) and won the Distinguished Flying Cross. We meet him and his mates, his co-pilot killed in action, and crews of other planes. Many went down in flames.

As Band of Brothers and Citizen Soldiers portrayed the bravery and ultimate victory of the American soldiers from Normandy on to Germany, The Wild Blue illustrates the enormous contribution that these young men of the Army Air Forces made to the Allied victory.Long before he entered politics, when he was just in his early 20s, South Dakotan George McGovern flew 35 bomber missions over Nazi-occupied Europe, earning a Distinguished Flying Cross for bravery under fire. Stephen Ambrose, the industrious historian, focuses on McGovern and the young crew of his B-24 bomber, volunteers all, in this vivid study of the air war in Europe.

Manufactured by a consortium of companies that included Ford Motor and Douglas Aircraft, the B-24 bomber, dubbed the Liberator, was designed to drop high explosives on enemy positions well behind the front lines--and especially on the German capital, Berlin. Unheated, drafty, and only lightly armored, the planes were dangerous places to be, and indeed, only 50 percent of their crews survived to the war's end. Dangerous or not, they did their job, delivering thousand- pound bombs to targets deep within Germany and Austria.

In his fast-paced narrative, Ambrose follows many other flyers (including the Tuskegee Airmen, the African American pilots who gave the B-24s essential fighter support on some of their most dangerous missions) as they brave the long odds against them, facing moments of glory and terror alike. "It would be an exaggeration to say that the B-24 won the war for the Allies," Ambrose writes. "But don't ask how they could have won the war without it." --Gregory McNamee