A Photographic Record of the USAAF in the Second World War

Hardcover (344 pages), kindle
Over 500 personal photographs produce a unique flavor of life in and around the airbase plots of "Little America" in Norfolk. 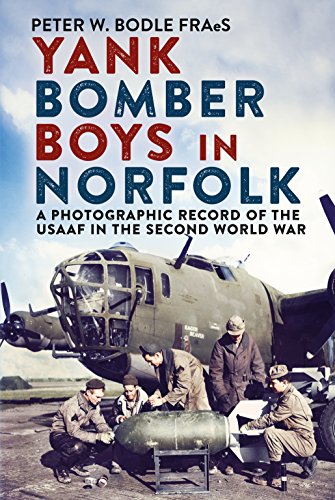 During the Second World War, thousands of American servicemen were uprooted from the US and deposited in rural England and immediately thrust unceremoniously into the frontline of the largest conflict the world has ever seen. Fortunately, many remembered to pack small cameras in kitbags and snapped photographs of their everyday lives as the war unfolded.

Yank Bomber Boys in Norfolk: A Photographic Record of the USAAF in the Second World War features over 500 of these personal photographs to produce a unique flavour of life in and around these airbase plots of 'Little America' in Norfolk. None of the photos used in this fascinating book have been utilised from professional sources; the shots from the station's own Photographic Section were the top of the admissible list. Many of these photographs were taken on cheap box cameras and the single prints they produced have been kept for decades by the GIs and their families in the States. Others have been painstakingly collected, documented and restored by a group of British archivists who have kindly allowed the author access to their priceless collections.

This is how the Second World War looked to those airmen who were there.

Both the print and kindle editions contain 525 black-and-white photographs.