Enemy At The Gates

DVD, Blu-ray
Losing to Hitler wasn't going to mean life under Nazi rule, it would literally mean the annihilation of every Soviet man, woman and child. The stakes were all or nothing. 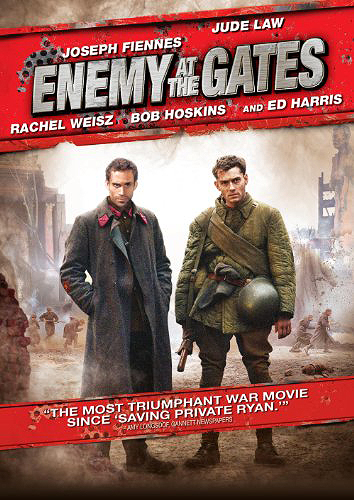 What makes Enemy At The Gates an essential WWII movie?

The opening scene of untrained Russian soldiers getting off a train and being sent directly into battle with no rifle and only one bullet, being told they'll find plenty of guns up ahead on the battlefield, really conveys the Red Army's sense of desperation. After all, losing to Hitler wasn't going to mean life under Nazi rule, it would literally mean the annihilation of every Soviet man, woman and child. The stakes were all or nothing.

Not only does this film properly convey the sheer horror of this, history's bloodiest battle, it delves into an intense cat-and-mouse game between two expert enemy snipers. Toss in an intriguing love triangle, and you've got a great movie that belongs in every WWII collection.

During the Nazi siege of Stalingrad an expert Soviet sharpshooter faces the Germans' best marksman in this cat-and-mouse WWII thriller. Like Saving Private Ryan, Enemy at the Gates opens with a pivotal event of World War II--the German invasion of Stalingrad--re-created in epic scale, as ill-trained Russian soldiers face German attack or punitive execution if they flee from the enemy's advance. Director Jean-Jacques Annaud captures this madness with urgent authenticity, creating a massive context for a more intimate battle waged amid the city's ruins. Embellished from its basis in fact, the story shifts to an intense cat-and-mouse game between a Russian shepherd raised to iconic fame and a German marksman whose skill is unmatched in its lethal precision. Vassily Zaitzev (Jude Law) has been sniping Nazis one bullet at a time, while the German Major Konig (Ed Harris) has been assigned to kill Vassily and spare Hitler from further embarrassment.

There's love in war as Vassily connects with a woman soldier (Rachel Weisz), but she is also loved by Danilov (Joseph Fiennes), the Soviet officer who promotes his friend Vassily as Russia's much-needed hero. This romantic rivalry lends marginal interest to the central plot, but it's not enough to make this a classic war film. Instead it's a taut, well-made suspense thriller isolated within an epic battle, and although Annaud and cowriter Alain Godard (drawing from William Craig's book and David L. Robbins's novel The War of the Rats) fail to connect the parallel plots with any lasting impact, the production is never less than impressive. Highly conventional but handled with intelligence and superior craftsmanship, this is warfare as strategic entertainment, without compromising warfare as a manmade hell on Earth. --Jeff Shannon