How One Man Changed Himself to Change the World

Paperback (200 pages), kindle, audiobook
An unsuccessful young lawyer becomes the Mahatma, the "great soul" and leads 400 million Indians in their struggle for independence from the British Empire. Gandhi's life continues to inspire and baffle readers today. 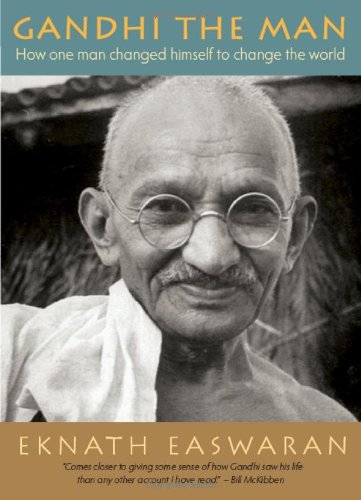 This is the moving story of a nonviolent hero, illustrated with more than 70 photographs, and told by a highly respected author who grew up in Gandhi's India.

Gandhi's life continues to inspire and baffle readers today. How did an unsuccessful young lawyer become the Mahatma, the "great soul" who led 400 million Indians in their struggle for independence from the British Empire? What is nonviolence, and how does it work?

Easwaran answers these questions and gives a vivid account of the turning points and choices in Gandhi's life that made him an icon of nonviolence. Easwaran witnessed at firsthand how Gandhi inspired ordinary people to turn fear into fearlessness, and anger into love. He visited Gandhi in his ashram to find out more about this human alchemy, and during the prayer meeting watched the Mahatma absorbed in meditation on the Bhagavad Gita, the scripture that was the wellspring of his spiritual power.

Quotations highlight Gandhi's teachings in his own words, and sidebar notes and a chronology, new to this updated edition, provide historical context.

This book conveys the spirit and soul of Gandhi the only way he can be truly understood.