DVD - 2 discs
The true story of five brothers who fought and died together when their ship was sunk in the South Pacific; the movie that inspired "Saving Private Ryan." 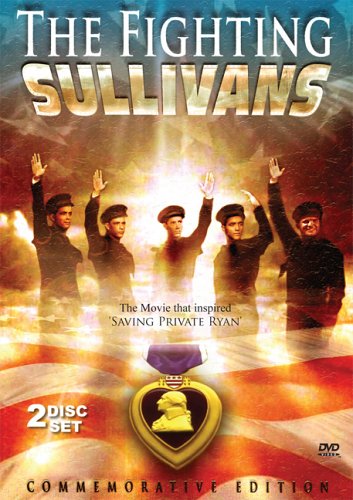 The Guts and Glory of the Navy! This is the movie that inspired "Saving Private Ryan." It's the true story of five brothers who fought and died together when their ship, the American cruiser Juneau, was sunk in the South Pacific during World War II.

The Fighting Sullivans is something more than a worthy tribute to a pair of small town parents and the five sons they lost when the Juneau blew up in a battle off Guadalcanal on November 14, 1942. It is a heartwarming slice of Americana that will fill in the background of any number of Americans on the fighting front. The audience's awareness of the news in store for the Sullivan family adds considerably to the film's effect.

The Fighting Sullivans generates emotion strictly on its own terms and without bidding for tears. This Commemorative Edition marks the 63rd anniversary of the sinking of the Juneau.