A History of Horror

Paperback (384 pages), kindle, audiobook
Chronicle of how the land of Beethoven elevated sadism to a fine art, written by a victim of the Gestapo, from interviews with former Gestapo agents. 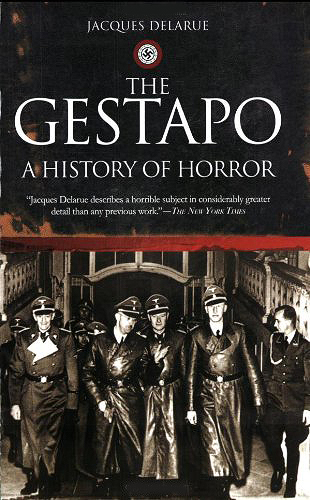 A history of Nazi Germany's secret police written by one of their victims, with a new introduction by the author.

From 1933 to 1945, the Gestapo was Nazi Germany's chief instrument of counter-espionage, political suppression, and terror. Jacques Delarue, a saboteur arrested by the Nazis in occupied France, chronicles how the land of Beethoven elevated sadism to a fine art. The Gestapo: A History of Horror draws upon Delarue's interviews with ex-Gestapo agents to deliver a multi-layered history of the force whose work included killing student resisters, establishing Aryan eugenic unions, and implementing the Final Solution.

This is a probing look at the Gestapo and the fanatics and megalomaniacs who made it such a successful and heinous organization—Barbie, Eichmann, Himmler, Heydrich, Müller. The Gestapo's notorious reign led to the murder of millions. The Gestapo is an important documentation of what they did and how they did it.