The Story of 30 Assault Unit in WWII

Paperback (416 pages), kindle
As personal assistant to the British Director of Naval Intelligence, Lt Commander Ian Fleming set up a unit of authorized looters - men who would go in hard with the front-line troops and steal enemy intelligence. 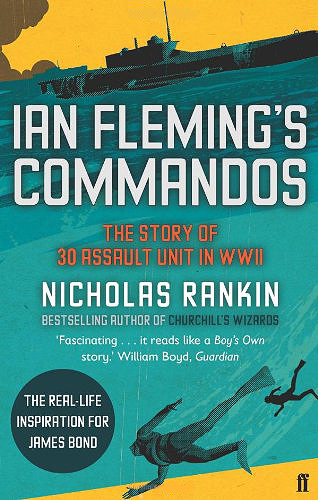 In 1942, Lieutenant-Commander Ian Fleming was personal assistant to the Director of Naval Intelligence - the dynamic figure behind James Bond's fictional chief, 'M'.

Here, Fleming had a brilliant idea: why not set up a unit of authorised looters, men who would go in hard with the front-line troops and steal enemy intelligence? Known as '30 Assault Unit', they took part in the major campaigns of the Second World War, landing on the Normandy beaches and helping to liberate Paris. 30AU's final amazing coup was to seize the entire archives of the German Navy - thirty tons of documents. Ian Fleming flew out in person to get the loot back to Britain, where it was combed for evidence to use in the Nuremburg trials.

In this gripping and highly enjoyable book, Nicholas Rankin, author of the best-selling "Churchill's Wizards", puts 30 Assault Unit's fascinating story in a strategic and intelligence context. He also argues that Ian Fleming's Second World War service was one of the most significant periods of his life - without this, the most popular spy fiction of the twentieth century would not have been written.

During the war, Ian Fleming was attached to British Naval Intelligence and was the personal assistant to its director, Admiral John Godfrey, who issued the memo that eventually led to the incredible scheme of deception known as Operation Mincemeat that fooled Hitler into thinking that the Allies would attack Greece rather than Sicily. That "Trout Memo" is said to have had the hallmarks of having been written by Fleming himself.