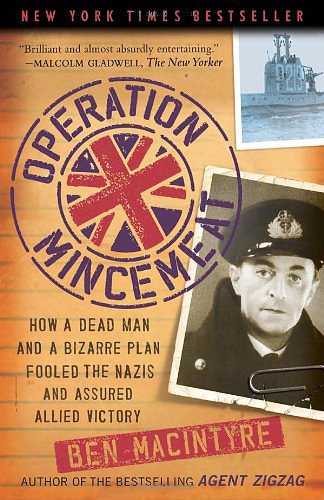 Ben Macintyre’s Agent Zigzag was hailed as “rollicking, spellbinding” (New York Times), “wildly improbable but entirely true” (Entertainment Weekly), and, quite simply, “the best book ever written” (Boston Globe). In his new book, Operation Mincemeat, he tells an extraordinary story that will delight his legions of fans.

In 1943, from a windowless basement office in London, two brilliant intelligence officers conceived a plan that was both simple and complicated— Operation Mincemeat. The purpose? To deceive the Nazis into thinking that Allied forces were planning to attack southern Europe by way of Greece or Sardinia, rather than Sicily, as the Nazis had assumed, and the Allies ultimately chose.

Charles Cholmondeley of MI5 and the British naval intelligence officer Ewen Montagu could not have been more different. Cholmondeley was a dreamer seeking adventure. Montagu was an aristocratic, detail-oriented barrister. But together they were the perfect team and created an ingenious plan: Get a corpse, equip it with secret (but false and misleading) papers concerning the invasion, then drop it off the coast of Spain where German spies would, they hoped, take the bait. The idea was approved by British intelligence officials, including Ian Fleming (creator of James Bond). Winston Churchill believed it might ring true to the Axis and help bring victory to the Allies.

Filled with spies, double agents, rogues, fearless heroes, and one very important corpse, the story of Operation Mincemeat reads like an international thriller.

Unveiling never-before-released material, Ben Macintyre brings the reader right into the minds of intelligence officers, their moles and spies, and the German Abwehr agents who suffered the “twin frailties of wishfulness and yesmanship.” He weaves together the eccentric personalities of Cholmondeley and Montagu and their near-impossible feats into a riveting adventure that not only saved thousands of lives but paved the way for a pivotal battle in Sicily and, ultimately, Allied success in the war.

From the Hardcover edition.

Amazon Exclusive Essay: When Spycraft Is Not Crafty Enough by Ben Macintyre 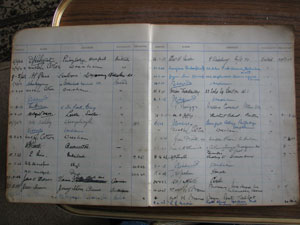 Soon after Operation Mincemeat was launched, Britain’s spymasters realized they had made a glaring mistake. They tried to correct it and, in the process, made it much worse.

In Chapter Seven of Operation Mincemeat, I identified various "hostages to fortune" left by the planners of the deception--most importantly, the fake, dated letter from Bill Martin’s "father," handwritten on the writing paper of a Welsh Hotel.

"The plot would never have stood up to scrutiny if German spies in Britain had made even the most cursory checks on it," I wrote. "A glance at the hotel register for the Black Lion Hotel would have showed that no J. C. Martin had stayed there on the night of April 13."

Two weeks after Operation Mincemeat was published, I received a telephone call at The Times, of the sort that non-fiction writers both welcome--and dread.

"I happen to have the hotel register for the Black Lion," said the Welsh voice on the other end. "And if you look at the page for April, 1943, you will clearly see the name J. C. Martin."

I was flabbergasted, and my respect for the planners of Operation Mincemeat rose another notch. They had thought of everything: they had even dispatched someone to Mold, in North Wales, to stay at the hotel and pose as the fictional father of a fictional officer, simply to ensure that the hotel register looked correct if anyone came snooping afterwards. That was true spycraft.

When the caller sent me a photograph of the page from the register, I studied it carefully. The handwriting was that of Charles Cholmondeley, the originator and co-creator of Operation Mincemeat. The false address given for "J. C. Martin" was Scotts House, Eynsham, in Oxfordshire (now a daycare center).

The faked letter in Major Martin’s pocket clearly indicated that "Father" had been staying at the hotel for some time ("the only alternative to imposing myself once more on your aunt"). The register indicated that he had arrived at the hotel on April 9th, and checked out on the 20th, in time for the fake meeting with his son in London.

So far, so convincing.

But closer examination revealed something very odd. The name and signature of J. C. Martin did not appear in the correct date sequence, but was added in the space at the bottom of the page. It was clearly an afterthought, written in sometime afterwards. To even the most casual investigator this would have set off loud alarm bells: so far from covering up the mistake, Cholmondeley had compounded it, by drawing attention to the fact that there was something distinctly out of the ordinary about John Martin and his sojourn at the Black Lion.

One can speculate about what must have happened. As Mincemeat got underway, the planners began to realize that it was working far more effectively that they had dared to hope. They began to wonder and worry about possible loose ends. The coroner, Bentley Purchase, was contacted again and quizzed over whether, if the Germans exhumed the body and carried out another post mortem, they would be able tell that Martin had died of poisoning, rather than drowning. (He was confident they would not.)

They also, I suspect, took another look at the letters, and sent Cholmondeley to Mold. The result was not a cover-up, but a giveaway. A register without the name J.C.Martin would merely have presented a mystery; a register with the name so obviously added in was patently a botched attempt to deceive.

In the end, it did not matter. There is no evidence that the Germans ever carried out any checking of the Bill Martin backstory. Had they attempted to do so, this would almost certainly have been picked up by British intelligence since the entire German espionage system in the U.K. was effectively controlled by MI5. Once the lie was embedded in German strategic thinking, no effort was made to disprove it.

Still, it is sobering thought, that if a single German agent had traveled to Mold and examined the register of the Black Lion, he would surely have spotted the obvious addition of “J.C.Martin”, recognized there was something fishy going on, and warned the Germans before the invasion of Sicily. The island might then have been reinforced, and countless lives might have been lost with incalculable consequences. That single register entry could have changed the course of World War II.

One of the great pleasures of writing about this period, is the way that history never stands still. The register of the Black Lion is only one of many fragments that have appeared, since the book was published, to enlarge and complete the story of Operation Mincemeat.

The moral for spy-craftsmen? If it ain’t broke, don’t fix it. And if it cannot be fixed without giving the game away, don’t touch it.

Q: What inspired you to write about this little-known story from World War II?
A: I first came across the story while researching my last book, Agent Zigzag, about the British criminal and double agent Eddie Chapman. One of his case officers, Ewen Montagu, was the mastermind behind Operation Mincemeat. The more I dug, the more information emerged about this true story, for so long shrouded in myth and mystery.

Q: Was it difficult to make contact with Ewen Montagu’s family, and were they helpful in your research?
A: The members of the Montagu family were easy to find and hugely helpful; indeed, this book could not have been written without them. After the war, Ewen Montagu retained most of the official papers relating to Operation Mincemeat. After he died, they were put in a wooden trunk, and almost forgotten. In 2007, the family gave me full access to the papers, including the official records, but also memos, letters, photographs, and a 200-page memoir written by Montagu himself.

Q: What was the most interesting/surprising detail that you uncovered as you were gathering information for Operation Mincemeat?
A: The most extraordinary aspect of Operation Mincemeat, to my mind, is the way that the organizers approached this elaborate, many-layered deception operation as if they were writing a novel, imagining a version of reality and then luring the truth towards it. Indeed, the talents required for espionage and fiction-writing are not so very different. At the center of the plot was the fictional figure of William Martin: he was equipped with not only false papers but an entirely false personality and past, including a fiancée, complete with love letters.

Q: There are a number of fascinating figures in Operation Mincemeat. Which person were you most intrigued by, and why?
A: I was particularly fascinated by Charles Cholmondeley, the RAF officer seconded to MI5 who first dreamed up the plan to use a dead body to plant false information on the Germans. Cholmondeley had a long, waxed, air-force mustache, a shy personality, and a very strange mind, but he was a genius at deception work, and the unsung hero of Operation Mincemeat. Unlike other participants, he was modest about the achievement, never told anyone what he had done during the war, and ended up selling lawn mowers in a small town in rural England.

Q: Where did you conduct most of your research, and did you encounter any difficulties or roadblocks along the way?
A: This book took me to Spain, France, and the U.S., but most of the research was conducted in British archives and interviewing survivors from that time. Despite Britain’s draconian Official Secrecy Act, rather than hindering or obstructing my research, MI5 and MI6 (the security service and secret intelligence service) were extraordinarily helpful. Perhaps the main impediment was time: the events described in the book are now on the furthest tip of living memory, most of the participants are now dead, and in some ways the research was a race to capture the memories of the living before they, too, are gone.

Q: In the book, you hint that Ewen Montagu (playing Bill) and Jean Leslie (playing Pam) may have taken their roles as "lovers" too seriously. What is your belief about their relationship?
A: Whether the imagined courtship between "Bill" and "Pam" was ever more than merely flirtatious banter is unknown, and likely to remain that way. Certainly Ewen was “smitten” with Jean (her word), and they both played along with their allotted roles. Wartime Britain was filled with fear and danger, but for those in the spying game, it was also a time of great excitement and romance. If the imagined love affair overlapped with reality, that would fit with the story, in which the framers invented a deception so real they began to believe it themselves.

Q: Did you have the opportunity to visit the gravestone of Glyndwr Michael/Major William Martin in Huelva? How do you think his family would have felt if they had known the unexpected and important role their son played in the outcome of World War II?
A: I did visit the grave in Huelva: it is a most atmospheric and tranquil place, looking down over the port and the shoreline where the body of "William Martin" was found in 1943. Glyndwr Michael’s family was a troubled one, crushed by poverty and with a history of mental illness. I think they would have been astonished and delighted in equal measure that Glyndwr played such a crucial role in history, albeit posthumously, and through no choice of his own.