Paperback (208 pages)
An account of the disruption wrought by urban expressways to large portions of the nation's central cities, and the spread of freeway revolts that led to the teardown movement. 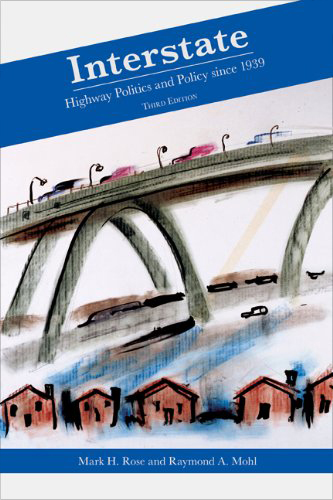 This new, expanded edition brings the story of the Interstates into the twenty-first century.  It includes an account of the destruction of homes, businesses, and communities as the urban expressways of the highway network destroyed large portions of the nation’s central cities.  Mohl and Rose analyze the subsequent urban freeway revolts, when citizen protest groups battled highway builders in San Francisco, Baltimore, Memphis, New Orleans, Washington, DC, and other cities.  Their detailed research in the archival records of the Bureau of Public Roads, the Federal Highway Administration, and the U.S. Department of Transportation brings to light significant evidence of federal action to tame the spreading freeway revolts, curb the authority of state highway engineers, and promote the devolution of transportation decision making to the state and regional level.  They analyze the passage of congressional legislation in the 1990s, especially the Intermodal Surface Transportation Efficiency Act (ISTEA), that initiated a major shift of Highway Trust Fund dollars to mass transit and light rail, as well as to hiking trails and bike lanes.  Mohl and Rose conclude with the surprising popularity of the recent freeway teardown movement, an effort to replace deteriorating, environmentally damaging, and sometimes dangerous elevated expressway segments through the inner cities.  Sometimes led by former anti-highway activists of the 1960s and 1970s, teardown movements aim to restore the urban street grid, provide space for new streetcar lines, and promote urban revitalization efforts.  This revised edition continues to be marked by accessible writing and solid research by two well-known scholars.

Raymond A. Mohl is distinguished professor of history at the University of Alabama at Birmingham.  He is the author of South of the South: Jewish Activists and the Civil Rights Movement in Miami, 1945-1960 and co-editor of The Making of Urban America, 3rd edition.

Mark H. Rose is professor of history at Florida Atlantic University. He is the author of Cities of Light and Heat: Domesticating Gas and Electricity in Urban America and coauthor of The Best Transportation System in the World: Railroads, Trucks, Airlines and American Public Policy in the Twentieth Century.

Praise for the previous edition of Interstate

"The tale that Mark Rose relates in great detail is an illuminating one of pressure politics, revealing aspects of the fragmentation of social and political life rarely examined by scholars."
— Richard Lowitt, American Studies

"Rose has done pioneering work in highway history.  This is a small book but an important one.  We are becoming more acutely aware that in our world technology and politics are inextricably intertwined.  Here is an excellent case study."
— John B. Rae, ISIS

"An extensively researched, brief, and important study that adds to our knowledge of interest group politics and the impact of the motor vehicle in the United States."
— Blaine A. Brownell, American Historical Review

"An excellent contribution to political and transportation history... an extremely useful account of the various hearings, conferences, and behind-the-scenes maneuverings that finally led to federal absorption of 90 percent of construction costs through the instrumentality of the Highway Trust Fund... an impressive beginning to historical scholarship on a vastly important topic."
— Kenneth T. Jackson, Journal of American History

"A remarkably thorough, objective survey and analysis of the role of various interest groups in fashioning highway policies in the 1940s and 1950s... a pioneer, definitive examination of highway development and transportation policy-making from the standpoints of various special interest groups."
— Michael Robinson, Public Works Historical Society

"This volume will fill an important area in many collections that probably have several volumes on transportation development after 1956.  Persons interested in political processes, policy formation, and urban history will find this volume a useful and important contribution toward understanding the post-World War II period."
— Choice