Paperback (375 pages), kindle, audiobook
The historic creation and the many people affected by the Interstates; from the largely forgotten technocrats who planned the system, to the thousands of city dwellers who resisted the concrete juggernaut when it bore down on their neighborhoods. 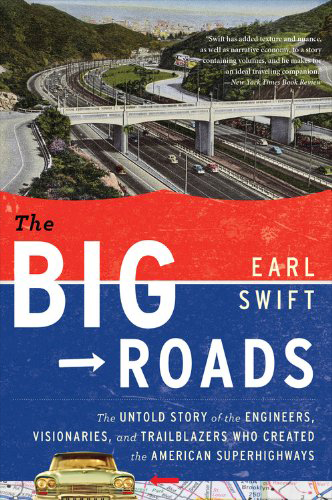 "Travelers hitting the highways this summer might better appreciate the asphalt beneath their tires thanks to this engrossing history of the creation of the U.S. interstate system."
— Los Angeles Times

Perhaps nothing changed the face of America more than the creation of the interstate system. At once man-made wonders, economic pipelines, agents of sprawl, and uniquely American sirens of escape, the interstates snake into every aspect of modern life. The Big Roads documents their historic creation and the many people they've affected, from the speed demon who inspired a primitive web of dirt auto trails, to the cadre of largely forgotten technocrats who planned the system years before Ike reached the White House, to the thousands of city dwellers who resisted the concrete juggernaut when it bore down on their neighborhoods.

The Big Roads tells the story of this essential feature of the landscape we have come to take for granted. With a view toward players both great and small, Swift gives readers the full story of one of America's greatest engineering achievements.

"The book is a road geek's treasure—and everyone who travels the highways ought to know these stories."
— Kirkus Reviews

A man-made wonder, a connective network, an economic force, a bringer of blight and sprawl and the possibility of escape—the U.S. interstate system changed the face of our country. The Big Roads charts the creation of these essential American highways. From the turn-of-the-century car racing entrepreneur who spurred the citizen-led "Good Roads" movement, to the handful of driven engineers who conceived of the interstates and how they would work—years before President Eisenhower knew the plans existed—to the protests that erupted across the nation when highways reached the cities and found people unwilling to be uprooted in the name of progress, Swift follows a winding, fascinating route through twentieth-century American life.

How did we get from dirt tracks to expressways, from main streets to off-ramps, from mud to concrete and steel, in less than a century? Through decades of politics, activism, and marvels of engineering, we recognize in our highways the wanderlust, grand scale, and conflicting notions of citizenship and progress that define America. 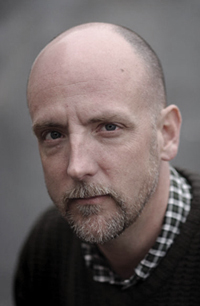 Q: What drew you to writing about the interstate highways?

A: Well, they're kind of hard to miss. They've snaked their way into every aspect of our lives — where we live and work and go to school, what we eat, how we view time and distance. They've altered the shape and size and character of our cities, and what it means to live in the "country." We see the physical United States differently, thanks to this weave of concrete. Check out the weather map on any TV news program, national or local: the United States is no longer depicted topographically, with rivers and mountains as its reference points, but as a grid of highways. That reflects how we've come to see America: not as an expanse of physical obstacles, but as a network of high-speed corridors that are so ubiquitous, they're taken for granted.

The fresh salad you toss at home and the steak you savor at a big-city restaurant wouldn't be possible without them. The clothes, furniture, electronics, even the house you buy, depend on the speed and access they provide. Building the interstates wasn't simply a matter of pouring concrete; they helped create the modern American experience.

Q: The book's subtitle mentions the "engineers, visionaries, and trailblazers" who created America's superhighways, but nothing about presidents. Weren't the interstates Dwight Eisenhower's doing?

A: Actually, Ike had very little to do with them — which may come as a surprise, seeing as how they're named for the man and associated with his time in office, alongside coonskin caps and polio shots. In truth, FDR had more of a hand in the interstates. And their origins date back decades before him: they're the product of an evolution that began before America's entry into World War I.

The real fathers of our modern highway system will be unknown names to most readers. There's Carl Fisher, who inspired the nation's first primitive network of motor roads; Thomas MacDonald and a supporting cast in the federal Bureau of Public Roads, who turned that network into the numbered U.S. highway system in the mid-twenties and drew up plans for the interstates in the late thirties; and Frank Turner, who played the starring role in turning that prewar vision into what we have today.

Alongside these builders are a host of men and women who helped shape what we got, some of them by resisting the system's advance — people like Lewis Mumford, a writer who initially championed high-speed roads and later became their harshest critic.

Q: Did you know of these players before you started work on the book?

A: No, I didn't. I assumed I knew the basics, that Eisenhower was a major figure in the story. The more I researched, the more I came to see that it wasn't so.

The myth was helped along by Ike himself. In his memoirs he writes about a coast-to-coast trip he took with an army truck convoy in 1919, and how it opened his eyes to the primitive state of American roads; it took the convoy 62 days to drive from D.C. to San Francisco. A quarter-century later, his armies advanced on Berlin using Germany's autobahns, and he realized that here was the answer — and so it was, he wrote, that building a superhighway network became one of his priorities as president.

Ike certainly had both of those experiences, and they may well have fueled his desire for big roads. But by the time he got into politics, the interstates were a done deal. How they are, and where they are, had largely been decided, and they differed in fundamental ways with what he had in mind.

Q: Did you drive much of the system in researching the book?

Researching the story's main characters required that I spend a good bit of time with their papers, which are locked away in university archives and libraries all over the country. On one road trip, in the summer of 2008, my daughter and I drove from our home on the Virginia shore to Hot Springs, Arkansas; Texas A&M Fort Worth; Iowa State; the small town of Montezuma, Iowa; Ottawa, Illinois; and the University of Michigan's main campus in Ann Arbor. On another research trip, in the summer of 2006, we drove the Lincoln Highway through eleven states.

Q: Are you a fan of the system?

A: Most of the time I'm on it, yes. But it certainly has its negatives: an interstate exit has more in common with interchanges a thousand miles away than it does with the local countryside; the system amounts to a fifty- first state, a place unto itself — one of unvaried engineering, look-alike architecture, taste-alike food.

So driving an interstate through, say, New Mexico is not exactly like visiting New Mexico. You can see it from the highway, but you're kept at a distance by the interstate's wide corridor, and the view is blurred by your speed; you're in it, but not of it. It's a bit like changing planes in an airport terminal. You can't really say you've been to the surrounding city.

For all that, I enjoy driving on interstates. I enjoy their smooth speed; I'd imagine it's as close as most of us come to piloting a plane. I appreciate their ease and safety. I'm awed by their scale. Some of their approaches to cities offer truly spectacular views. And I've had some wonderful moments on them, with company and without. I get a lot of thinking done when I'm on the road.

Plus, there's this: whatever their flaws, whatever unintended ills they spawned, the interstates do exactly what they were designed to do, and do it very well. They account for one percent of our highway mileage. They carry a quarter of our traffic. They're really pretty amazing.

Q: Do you have any favorite routes?

A: I always look forward to driving I-81 through Virginia's Shenandoah Valley — the Blue Ridge looms to the east, the Alleghenies to the west. It's gorgeous, though you can't gaze for too long, because the highway's crowded with trucks. I-40 in the Southwest and I-80 in the Great Plains pass through some austere but beautiful country. There's a pleasing lonesomeness to those drives. I-10 rides a causeway through the Louisiana swamps; drive it just after dawn, it's otherworldly.

A: Oh, sure. Whenever I drive the New Jersey Turnpike or the Long Island Expressway, I can't say I'm having a good time; they can be harrowing. Same goes for the Capital Beltway at rush hour, which most days seems to last about eighteen hours.

I avoid certain rural stretches whenever possible. I-35 between Fort Worth and Waco is weedy, trash-strewn, ugly. The Indiana Toll Road is an eyesore. The road surfaces in Michigan and Illinois are close to lunar.

As for moments of real danger, I was in a dozen-car pileup once, on I-44 in southern Missouri. Didn't get hurt, but it was an eerie experience to see such a lavish piece of engineering rendered unusable; the whole highway was blocked by wreckage. I was rear-ended while stopped at another snow-related accident by a Camaro doing 50; I was in a microscopic Fiat. That was unpleasant, to say the least, but again, I didn't get hurt.

Then there was the time my MG started to overheat as I drove alone across the desert from Needles to Barstow, California. It was blistering out — 110 degrees or so — and I had no choice but to crank up the heater. That stretch of I-40 was the longest hundred miles I've ever driven. On any kind of road.