Paperback (344 pages)
Scrutinized in new ways, the bodies and minds of women came to indicate how seriously they took their responsibilities in the fight for victory. 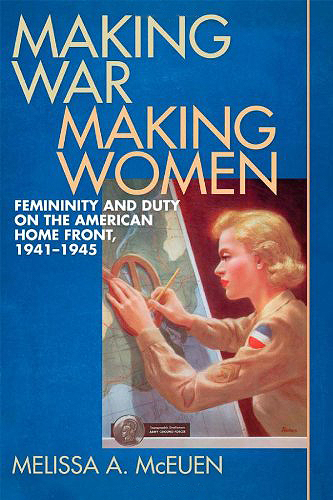 Drawing on war propaganda, popular advertising, voluminous government records and hundreds of letters and other accounts written by women in the 1940s, Melissa A. McEuen examines how extensively women's bodies and minds became "battlegrounds" in the fight for victory in World War II.

Women were led to believe that the nation’s success depended on their efforts — not just on factory floors, but at their dressing tables, bathroom sinks, and laundry rooms. They were to fill their arsenals with lipstick, nail polish, creams, and cleansers in their battles to meet the standards of ideal womanhood touted in magazines, newspapers, billboards, posters, pamphlets and in the rapidly expanding pinup genre. Scrutinized and sexualized in new ways, women understood that their faces, clothes, and comportment would indicate how seriously they took their responsibilities as citizens. McEuen also shows that the wartime rhetoric of freedom, democracy, and postwar opportunity coexisted uneasily with the realities of a racially stratified society. The context of war created and reinforced whiteness, and McEuen explores how African Americans grappled with whiteness as representing the true American identity.

Using perspectives of cultural studies and feminist theory, Making War, Making Women offers a broad look at how women on the American home front grappled with a political culture that used their bodies in service of the war effort.

No more than 1,800 copies of the 17 x 22-inch poster poster were printed back then. It is generally thought to be based on a black-and-white wire service photograph taken of a Michigan factory worker named Geraldine Hoff.