Marshall and His Generals:

Paperback (438 pages)
General George C Marshall, chief of staff of the US Army during WWII, faced the daunting task not only of overseeing two theaters of a global conflict, but also of selecting the best generals to carry out American grand strategy. 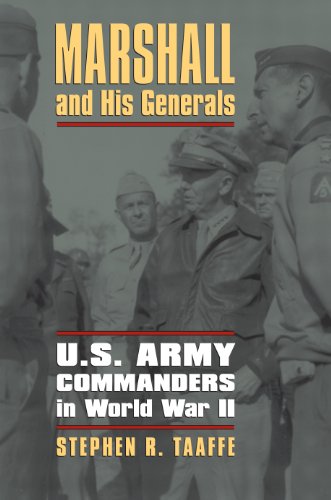 General George C. Marshall, chief of staff of the U.S. Army during World War II, faced the daunting task not only of overseeing two theaters of a global conflict but also of selecting the best generals to carry out American grand strategy. Marshall and His Generals is the first and only book to focus entirely on that selection process and the performances, both stellar and disappointing, that followed from it. Stephen Taaffe chronicles and critiques the background, character, achievements, and failures of the more than three dozen general officers chosen for top combat group commands—from commanders like Dwight Eisenhower and Douglas MacArthur to some nearly forgotten.

Taaffe explores how and why Marshall selected the Army's commanders. Among his chief criteria were character (including "unselfish and devoted purpose"), education, (whether at West Point, Fort Leavenworth, or the Army War College), and striking a balance between experience and relative youth in a war that required both wisdom and great physical stamina. As the war unfolded, Marshall also factored into his calculations the combat leadership his generals demonstrated and the opinions of his theater commanders.

Delving deeper than other studies, this path-breaking work produces a seamless analysis of Marshall's selection process of operational-level commanders. Taaffe also critiques the performance of these generals during the war and reveals the extent to which their actions served as stepping stones to advancement.

Ambitious in scope and filled with sharp insights, Marshall and His Generals is essential reading for anyone interested in World War II and military leadership more generally.