Paperback (306 pages), kindle
A portrait of the irrepressible man who delivered the "Iron Curtain Speech" and fundamentally defined the dangers of Soviet totalitarian Communism. 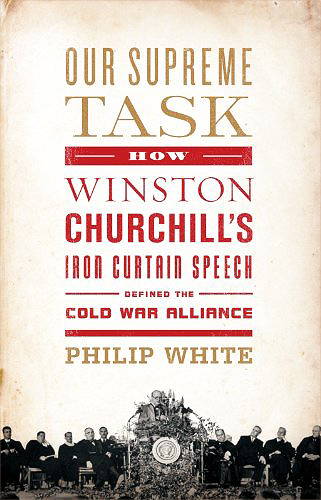 The year 1945 was a chaotic one, both for the world, of course, and for Winston Churchill. Communism was on the march and the people of Bulgaria, Romania, Yugoslavia, and Poland all found themselves in the grip of the Soviets. The Red Army occupied a large German territory, and the Kremlin was manipulating post-war food shortages, labor disputes, and social unrest in Greece, France, and Italy.

Having spent his "wilderness years" in the late 1930s warning of the dangers of diplomatic and military weakness and the growing menace of Nazism, in 1946 Churchill made a trip to Fulton, Missouri, to deliver a speech entitled "The Sinews of Peace," now known as the Iron Curtain Speech which served to fundamentally define the dangers of Soviet totalitarian Communism. This is the story of that pivotal speech and how it came to be given, and a portrait of the irrepressible man who delivered it.