The Boy Who Invented Television:

A Story of Inspiration, Persistence, and Quiet Passion

Paperback (296 pages), kindle
At age 14, a farm boy from Rigby, Idaho, Philo T Farnsworth dreamed of trapping light in an empty jar and transmitting it, one line at a time, on a magnetically deflected beam of electrons. 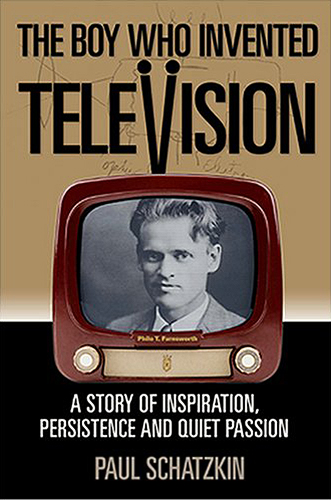 While the great minds of science, financed by the biggest companies in the world, wrestled with 19th century answers to a 20th century problem, Philo T. Farnsworth, age 14, dreamed of trapping light in an empty jar and transmitting it, one line at a time, on a magnetically deflected beam of electrons.

Philo Farnsworth was a self-educated farm boy from Rigby, Idaho, when he first sketched his idea for electronic television on a blackboard for his high school science teacher. Six years later, while competitors still struggled with mechanical television systems, Farnsworth successfully demonstrated his invention. He was 21.

In 1930, Farnsworth was awarded the fundamental patents for modern television. He spent the next decade perfecting his invention, fighting off challenges to his patents by the giant Radio Corporation of America and defending his vision against his own shortsighted investors who did not share his larger dream of scientific independence.

The Boy Who Invented Television traces Farnsworth's "guided tour" of discovery, describing the observations he made in the course of developing his initial invention, and revealing how his unique insights brought him to the threshold of what might have been an even greater discovery - clean, safe, and unlimited energy from controlled nuclear fusion.