Paperback (552 pages)
For five years, the Allies launched a trial and error bombing campaign against German cities with what can only be called "weapons of mass destruction." 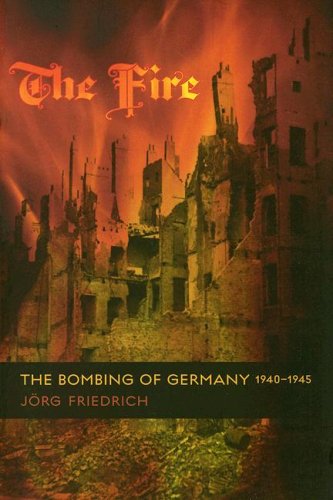 For five years during the Second World War, the Allies launched a trial and error bombing campaign against Germany's historical city landscape. Peaking in the war's final three months, it was the first air attack of its kind. Civilian dwellings were struck by-in today's terms-"weapons of mass destruction," with a total of 600,000 casualties, including 70,000 children.

In The Fire, historian Jörg Friedrich explores this crucial chapter in military and world history. Combining meticulous research with striking illustrations, Friedrich presents a vivid account of the saturation bombing, rendering in acute detail the annihilation of cities such as Dresden, the jewel of Germany's rich art and architectural heritage. He incorporates the personal stories and firsthand testimony of German civilians into his narrative, creating a macabre portrait of unimaginable suffering, horror, and grief, and he draws on official military documents to unravel the reasoning behind the strikes.

Evolving military technologies made the extermination of whole cities possible, but owing, perhaps, to the Allied victory and what W. G. Sebald noted as "a pre-conscious self-censorship, a way of obscuring a world that could no longer be presented in comprehensible terms," the wisdom of this strategy has never been questioned. The Fire is a rare account of the air raids as they were experienced by the civilians who were their targets.