The Life and Death of Germany's Last Super Battleship

Hardcover (256 pages), kindle, audiobook
The story of the battleship Tirpitz - Bismarck's sister ship - and the desperate Allied efforts to destroy it. 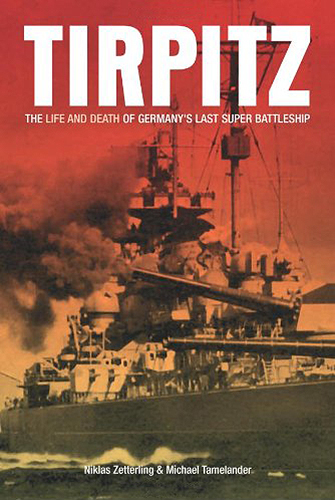 The story of the battleship Tirpitz - Bismarck's sister ship - and the desperate Allied efforts to destroy it.

After the Royal Navy's bloody high seas campaign to kill the mighty Bismarck, the Allies were left with an uncomfortable truth - the German behemoth had a twin sister. Slightly larger than her sibling, the Tirpitz was equally capable of destroying any other battleship afloat, as well as wreak havoc on Allied troop and supply convoys. For the next three and a half years the Allies launched a variety of attacks to remove Germany's last serious surface threat. The Germans, for their part, had learned not to pit their super battleships against the strength of the entire Home Fleet outside the range of protecting aircraft. Thus they kept Tirpitz hidden within fjords along the Norwegian coast, like a Damocles Sword hanging over the Allies' maritime jugular, forcing the British to assume the offensive.

This strategy paid dividends in July 1942 when the Tirpitz merely stirred from its berth, compelling the Royal Navy to abandon a Murmansk-bound convoy called PQ-17 in order to confront the leviathan. The convoy was then ripped apart by the Luftwaffe and U-boats, while the Tirpitz returned to its fjord. In 1943, the British launched a flotilla of midget submarines against the Tirpitz, losing all six of the subs while only lightly damaging the battleship. Aircraft attacked repeatedly, from carriers and both British and Soviet bases, suffering losses-including an escort carrier-while proving unable to completely knock out the mighty warship.

Trying an indirect approach, the British launched one of the war's most daring commando raids-at St. Nazaire - in order to knock out the last drydock in Europe capable of servicing the Tirpitz. Of over 600 commandos and sailors in the raid, more than half were lost during an all-night battle that succeeded, at least, in knocking out the drydock. It was not until November 1944 that the Tirpitz finally succumbed to British aircraft armed with 10,000-lb Tallboy bombs, the ship capsizing at last with the loss of 1,000 sailors.

In this book military historians Niklas Zetterling and Michael Tamelander, authors of Bismarck: The Final Days of Germany's Greatest Battleship, illuminate the strategic implications and dramatic battles surrounding the Tirpitz, a ship that may have had greater influence on the course of World War II than her more famous sister.

"...accurately synthesizes the available work on Allied efforts to destroy the battleship into one entertaining read... comes alive in its descriptions... well organized..."

"...a thorough treatment, including material from interviews with survivors of their sinkings and the impact they had on the naval war in the Atlantic."

"...effectively weaves the story of the battleship into the pattern of the war... A very good account of the Tirpitz and of the naval war in the North Atlantic and Norwegian waters."

"...a riveting story... well structured and keeps the reader engaged..."

Nautilus, A Maritime Journal of Literature, History and Culture

"The authors have woven Tirpitz's story quite well and in doing so explain the strategic implications and dramatic battles surrounding the super battleship. Their book is an excellent study of an aspect of naval strategy the Germans used with such aplomb... a welcome addition to my library."