If the Allies Had Fallen:

Paperback (304 pages), kindle, audiobook
From the Munich crisis and the dropping of the atom bombs to Hitler’s declaration of war on the US and the D-Day landings, historians suggest "what might have been" if key events in World War II had gone differently. 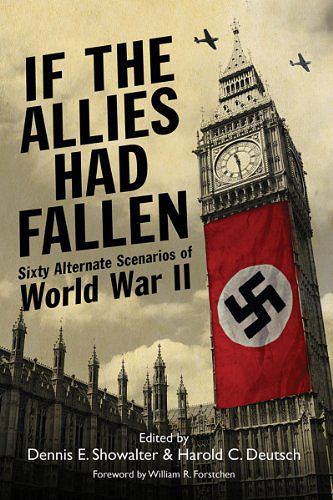 What if Stalin had signed with the West in 1939?

What if the Allies had been defeated on D-Day?

What if Hitler had won the war?

From the Munich crisis and the dropping of the first atom bomb to Hitler’s declaration of war on the United States and the D-Day landings, historians suggest "what might have been" if key events in World War II had gone differently.

Hindsight, of course, is always 20-20 and playing "armchair quarterback" after the game can never alter the past, but the urge to do so is alluring, even fun..

There were many turning points in World War II, such as the Allied victory in the Battle of Midway. But even if that battle had not unfolded as it did, the industrial might of the US would have eventually prevailed against Japan and the turning point in the Pacific would have occurred elsewhere and else-when. The same can be said for most any event or battle in the war.

However, two dates in particular could have done a lot more than merely alter the duration of the war, but could have changed things so completely as to have produced a different outcome, and thus altered the world in which we live today...