The Secret Hunt for U-Boat 864 During World War II

Paperback (304 pages), kindle
History is made in a cat-and-mouse battle beneath the waves between two submarines, one British and one German, as they hunted one another, each waiting to strike. 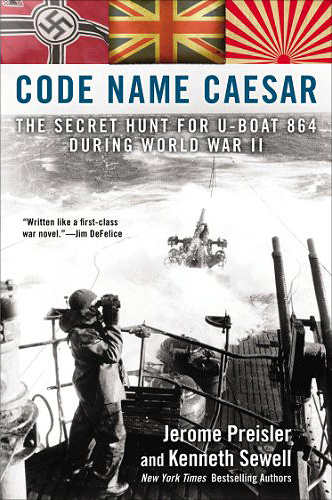 In the waning days of World War II, a little-known battle took place under the frozen seas off the coast of Norway . . . and changed the course of the war.

In February of 1944, Germany and Japan devised a desperate plan to escape defeat. The Germans would send Japan a submarine—boat U-864—packed with their most advanced rocket and jet aircraft technology. Japan could then reestablish air superiority in the Pacific, drawing the attention of Allied forces long enough for Germany to regroup.

Meanwhile, British code breakers, working with the Norwegian underground, had discovered the plan. But even though they were unable to stop the submarine from embarking, the British submarine HMS Venturer was waiting for it at sea. In a cat-and-mouse battle beneath the waves, they hunted one another, each waiting to strike. The Venturer won the game, becoming the only submarine in history to sink another sub in underwater combat.

This is the dramatic, action-packed account of one of the greatest unsung victories in military history, and of a historical moment in the annals of naval warfare.