Paperback (768 pages), kindle, audiobook
It is only a slight exaggeration to say that Alan Turing saved the Allies from the Nazis and invented the computer and artificial intelligence. 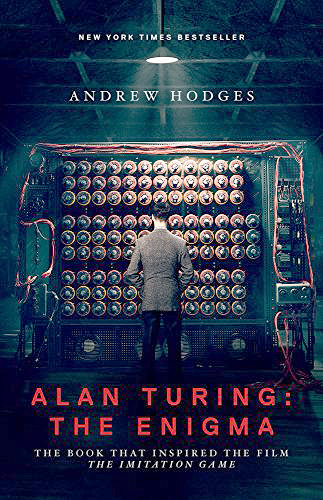 It is only a slight exaggeration to say that the British mathematician Alan Turing (1912-1954) saved the Allies from the Nazis, invented the computer and artificial intelligence, and anticipated gay liberation by decades -- all before his suicide at age forty-one. This New York Times–bestselling biography of the founder of computer science, with a new preface by the author that addresses Turing’s royal pardon in 2013, is the definitive account of an extraordinary mind and life.

Capturing both the inner and outer drama of Turing’s life, Andrew Hodges tells how Turing’s revolutionary idea of 1936 -- the concept of a universal machine -- laid the foundation for the modern computer and how Turing brought the idea to practical realization in 1945 with his electronic design. The book also tells how this work was directly related to Turing’s leading role in breaking the German Enigma ciphers during World War II, a scientific triumph that was critical to Allied victory in the Atlantic. At the same time, this is the tragic account of a man who, despite his wartime service, was eventually arrested, stripped of his security clearance, and forced to undergo a humiliating treatment program--all for trying to live honestly in a society that defined homosexuality as a crime.

The inspiration for a major motion picture starring Benedict Cumberbatch and Keira Knightley, Alan Turing: The Enigma is a gripping story of mathematics, computers, cryptography, and homosexual persecution.

Alan Turing died in 1954, but the themes of his life epitomize the turn of the millennium. A pure mathematician from a tradition that prided itself on its impracticality, Turing laid the foundations for modern computer science, writes Andrew Hodges:

Alan had proved that there was no "miraculous machine" that could solve all mathematical problems, but in the process he had discovered something almost equally miraculous, the idea of a universal machine that could take over the work of any machine.

During World War II, Turing was the intellectual star of Bletchley Park, the secret British cryptography unit. His work cracking the German's Enigma machine code was, in many ways, the first triumph of computer science. And Turing died because his identity as a homosexual was incompatible with cold-war ideas of security, implemented with machines and remorseless logic: "It was his own invention, and it killed the goose that laid the golden eggs."

Andrew Hodges's remarkable insight weaves Turing's mathematical and computer work with his personal life to produce one of the best biographies of our time, and the basis of the Derek Jacobi movie Breaking the Code. Hodges has the mathematical knowledge to explain the intellectual significance of Turing's work, while never losing sight of the human and social picture:

In this sense his life belied his work, for it could not be contained by the discrete state machine. At every stage his life raised questions about the connection (or lack of it) between the mind and the body, thought and action, intelligence and operations, science and society, the individual and history.

And Hodges admits what all biographers know, but few admit, about their subjects: "his inner code remains unbroken." Alan Turing is still an enigma. --Mary Ellen Curtin