Paperback (480 pages), kindle
The American ENIAC is customarily regarded as the first electronic computer, but this fascinating book argues that in reality Colossus - the giant computer built in Bletchley Park by the British secret service during WWII - predates ENIAC by two years. 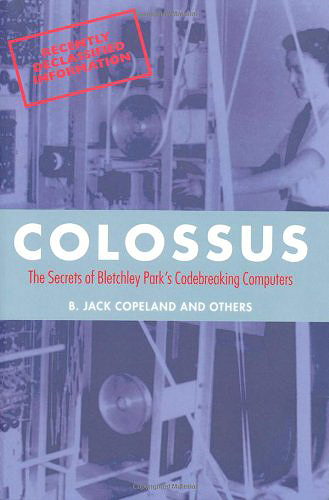 At last - the secrets of Bletchley Park's powerful codebreaking computers.

The American ENIAC is customarily regarded as the first electronic computer. In this fascinating volume, Jack Copeland rewrites the history of computer science, arguing that in reality Colossus--the giant computer built in Bletchley Park by the British secret service during World War II--predates ENIAC by two years. Until very recently, much about the Colossus machine was shrouded in secrecy, largely because the code-breaking algorithms employed during World War II remained in use by the British security services until a short time ago. Copeland has brought together memoirs of veterans of Bletchley Park--the top-secret headquarters of Britain's secret service--and others who draw on the wealth of declassified information to illuminate the crucial role Colossus played during World War II. A must read for anyone curious about code-breaking or World War II espionage, Colossus offers a fascinating insider's account of the world's first giant computer, the great-great-grandfather of the massive computers used today by the CIA and the National Security Agency.

This is a history of Colossus, the world's first fully-functioning electronic digital computer. Colossus was used during the Second World War at the Government Code and Cypher School at Bletchley Park, where it played an invaluable role cracking enemy codes. Until very recently, much about the Colossus machine was shrouded in secrecy, largely because the codes that were employed remained in use by the British security services until a short time ago. This book only became possible due to the declassification in the US of wartime documents.

With an introductory essay on cryptography and the history of code-breaking by Simon Singh, this book reveals the workings of Colossus and the extraordinary staff at Bletchley Park through personal accounts by those who lived and worked with the computer. Among them is the testimony of Thomas Flowers, who was the architect of Colossus and whose personal account, written shortly before he died, is published here for the first time. Other essays consider the historical importance of this remarkable machine, and its impact on the generations of computing technology that followed.