The Complete Story of Codebreaking in World War II

Paperback (448 pages)
From the Battle of Midway until the last German code was broken in January 1945, this is an astonishing epic of a war that was won not simply by brute strength but also by reading the enemy's intentions. 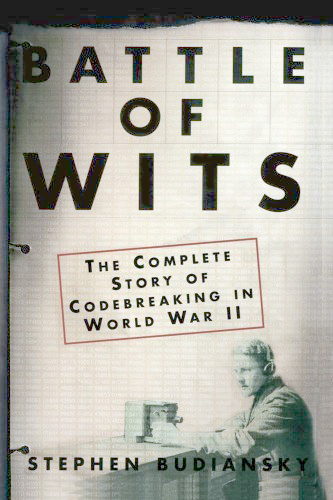 A million pages of new World War II codebreaking records have been released by the U.S. Army and Navy and the British government over the last five years. Now, Battle of Wits presents the history of the war that these documents reveal. From the Battle of Midway until the last German code was broken in January 1945, this is an astonishing epic of a war that was won not simply by brute strength but also by reading the enemy's intentions.

The revelations of Stephen Budiansky's dramatic history include how Britain tried to manipulate the American codebreakers and monopolize German Enigma code communications; the first detailed published explanations of how the Japanese codes were broken; and how the American codebreaking machines worked to crack the Japanese, the German, and even the Russian diplomatic codes. This is the story of the Allied codebreakers puzzling through the most difficult codebreaking problems that ever existed. At the same time, the compelling narrative shows the crucial effect codebreaking had on the battlefields by explaining the urgency of stopping the wolf pack U-boat attacks in the North Atlantic, the burning desire in the United States to turn the tide of the war after Pearl Harbor, the importance of halting Rommel's tanks in North Africa, and the necessity of ensuring that the Germans believed the Allies' audacious deception and cover plans for D-Day.

Budiansky brings to life the unsung codebreaking heroes of this secret war: Joseph J. Rochefort, an intense and driven naval officer who ran the codebreaking operation in "The Dungeon," a dank basement at Pearl Harbor, that effectively won the Battle of Midway; Alan Turing, the eccentric father of thecomputer age, whose brilliant electromechanical calculators broke the German Enigma machine; and Ian Fleming, whose daredevil espionage schemes to recover codebooks resembled the plots of the 007 novels he later wrote. Among the villains, we meet the Nazi Admiral Donitz, who led the submarine wolf packs against Allied shipping in the North Atlantic with horrific casualty rates -- until the codebreakers stopped him. Budiansky, a Harvard -- trained mathematician, demonstrates the mathematical insight and creativity of the cryptographers by showing step-by-step precisely how the codes were broken. This technology -- the flow of information, its encryption, and the computational methods of recovering it from the enemy -- had never before been so important to the outcome of a war. Informative diagrams, maps, appendices, and photographs show exactly how, why, and where the secret war was won.

Unveiled for the first time, the complete story of codebreaking in World War II has now been told.On December 3, 1941, officers of the U.S. Army Signal Intelligence Unit decoded a message sent from Tokyo to the Japanese embassy in Washington, ordering embassy staff to destroy its code books and other sensitive material. This, the officers determined, meant that Japan was preparing to break off diplomatic relations with the United States and go to war. When, they could not say; to gain a precise date, they would have had to break the Japanese naval codes. Therein, writes Stephen Budiansky in Battle of Wits, lay the rub: "Since mid-1939, America had not read a single message in the main Japanese naval code on the same day it had been sent. For most of the period from June 1, 1939, to December 7, 1941, the [U.S.] Navy was working on naval messages that were months, or even over a year old."

For all their lack of preparedness and occasional inefficiencies, and for all the disdain with which some Allied ground commanders held the work of military intelligence, writes Budiansky, Allied cryptographers were of critical importance in determining the outcome of World War II. The decoding of Japanese and German encryption engines, for instance, helped the Allied navies gain victory in the battles of the Atlantic and Midway, while the translation of secret German railroad schedules allowed Winston Churchill to warn Josef Stalin that the German army was about to invade the Soviet Union -- though Stalin refused to take the warning seriously. The codebreakers, in short, "averted disasters that would have been terrible setbacks to the Allied cause," and they almost certainly saved a considerable number of lives as they labored to crack such profound puzzles as Enigma and Purple.

Budiansky's narrative is strong on the science of cryptography -- so much so that readers without a background in mathematics and logic may have trouble following the arcana of key squares, bigrams, and all the other trade secrets of cryptanalysis. Readers willing to brave matters technical, however, will find Budiansky's comprehensive account to be the best single book on the subject, and one well worth their attention. -- Gregory McNamee