Fuel to the Troops:

A Memoir of the 698th Engineer Petroleum Distribution Company 1943-1945

Hardcover (330 pages), paperback
Although more of a series of anecdotes, than a regular narrative, this book nevertheless manages to inform the reader about a side of war that no one ever seems to think about: supply and engineering. 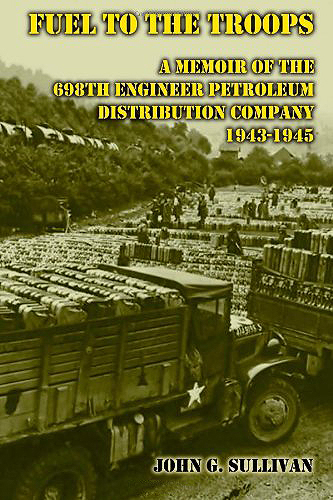 This story is about a place in time and a military unit which had a profound impact on military operations in the European Theater during World War II. The movement of petroleum products was critical in keeping the war machine moving and operating thousands of miles from the U.S. mainland. Providing the necessary fuels for the vehicles involved in fighting their way into Germany in 1944-45 was accomplished by an organization within the U.S. Army established by Charles A. McCann, a petroleum engineering graduate of the University of Oklahoma. McCann was a patriot who felt he could contribute to the war effort in a very specific way. His exceptional management skills and leadership ability made for a highly motivated organization that overcame the most difficult challenges at that time and place. While many have never known war, this story is a tribute to those men of the 698th Engineer Petroleum Distribution (EPD) Company. The EPD Company is their story and is told through the eyes of one of their comrades—John Sullivan. He recounts these individual sacrifices and lived though the many challenges every day for two years. It provides a behind the scenes look at daily operations and those untold stories from America’s “Greatest Generation.”

For those interested in the technical side of World War II, this makes for a good read. Although more of a series of anecdotes, than a regular narrative, it nevertheless manages to inform the reader about a side of war that no one ever seems to think about: supply and engineering. The author's unit, the 698th Petroleum Distribution Company, was one of several specialized engineering units that were created during the war. They started from scratch, and throughout the book, you get a sense that they had to make it up as they went along. It was far from a safe billet, and the company suffered many losses, especially at Antwerp. If you're looking for an unusual tale of World War II, I recommend Fuel to the Troops.