Paperback (875 pages)
An historical novel about women pilots who fly during WWII, the central character being the son of one of the British woman ferry pilots. 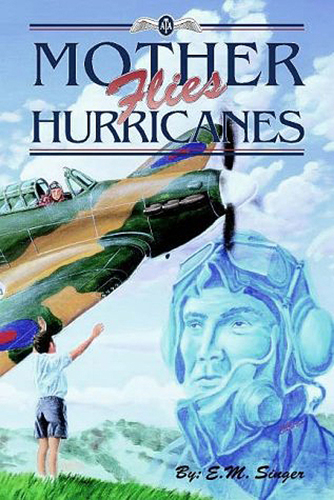 This coming-of-age WWII adventure tells the story of a British woman ferry pilot, as seen through the eyes of her young son. The war unleashes havoc on the life of Andrew Hadley-Trevelyan, transforming him from a naive nine-year-old into a conflict-scarred young man of fourteen. Along the way he must cope with bombings, family traumas, fear, loss, exile, and the invasion of his country by overpaid, oversexed, and over-here Yanks.

For better or worse, Andrew internalizes the war raging around him and often strikes out in the only way he can, sassing his mother and getting into trouble at school. Though he is capable of keeping a British stiff upper lip, he often goes ballistic when provoked. The targets of his rage are not only boys of his own age, but grown men as well. He can be snotty and spiteful, and is an expert in the dirty-tricks department when it comes to getting what he wants. Some of his endeavors are innocent and light-hearted, a much needed counterbalance to the destructive forces raging around him: He parleys his prowess at poker into liberating candy and comic books from American GIs. Without his father around, Andrew is on his own in trying to find out (in theory, at least) about the facts of life.

Things get worse when he is packed off to America and lands in a New Jersey public school, where he endures ridicule and bullying. His life then takes a turn for the complicated when two girls fall in love with him, and he is faced with working through his conflicting feelings, prejudices, and fears. It's not easy for Andrew to find his way in a world gone mad with violence and hate; still, his better self is capable of fierce loyalty, love, and compassion. In the end he must come to terms with what five years of devastating worldwide conflict have made of his life. Even as peace is declared, he is still caught in the throes of bitterness and guilt. Christmas of 1945 brings him to the greatest crisis of his life, as a shattering revelation and a tragic twist of fate propel him to maturity.

The Battle of Britain is the central historic event to Mother Flies Hurricanes, blowing Andrews peaceful life into chaos. Other episodes of the Second World War impact on his life in ways great and small: the Battle of the Atlantic, the Normandy Invasion, the V-1 and V-2 attacks upon England, and the Battle of the Bulge. The stars of Mother Flies Hurricanes are the men and women of Britain's Air Transport Auxiliary, as Andrew's mother signs on to do her bit in her country's fight against Nazi Germany. This organization drew pilots from thirty-one countries, and was the first in the world to employ women in ferrying military aircraft. Andrew is keenly aware of the struggle the women ferry pilots face to be accepted on equal terms during a time when there was overwhelming opposition towards women doing a man's job. They soon won acceptance among the male pilots of the ATA and the RAF with their skill and professionalism. Andrew is very proud of his mother, but knows she is doing a dangerous job and worries constantly for her safety. These Forgotten Pilots did not meet the Axis forces in battle, but their work in keeping the pilots of the Royal Air Force supplied with aircraft was just as vital to the war effort.

Mother Flies Hurricanes also brings to life the other forgotten people of the Second World War: the children who lived through that devastating conflict. They faced danger, destruction, and terror on a daily basis, and endured long years of misery, anxiety, loss, and despair. Though they did not wear a uniform, they were on the front lines just as much as any soldier in battle. This is a story of their struggles, resilience, and courage.