Paperback (186 pages)
One of only ten women flight instructors in the US, she flew nearly every airplane in the Army Air Forces inventory and taught flying to over 350 men in the Government's pre-WWII Civilian Pilot Training Program. 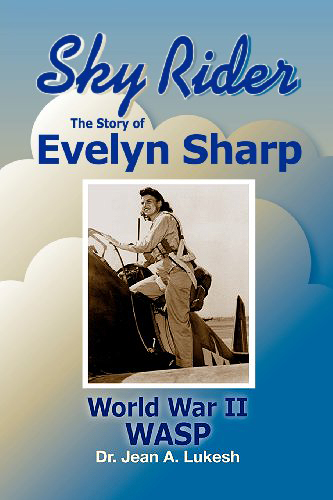 A young adult quick reader biography of Evelyn Sharp, written in a style that young people will be able to understand. Evelyn was an adopted girl who overcame asthma and many other problems and learned to fly an airplane as a teenager. She became the youngest woman commercial pilot, taught men to fly for war, and was a respected member of such women's flying groups as the WAFS and WASP.

By the age of twenty, Evelyn Sharp was one of only ten women flight instructors in the United States. Evelyn taught flying to over 350 men in the Government's pre-WWII Civilian Pilot Training Program in South Dakota and California. She brought more hours to the Ferrying Command than any of the other pilots. Freeing male pilots for combat, Evelyn flew nearly every airplane in the Army Air Forces inventory. She needed only to complete transition to the B-17 to earn the highest rating available.

Until her early death in an airplane accident in 1944, she left a legacy that helped open the way for the women pilots of today and tomorrow.