From Bismarck to Britain and Back

Paperback (364 pages), kindle
Ruth Register volunteered for the American Red Cross after her husband was killed in the Pacific. Her war story is a round trip ticket from North Dakota to Europe and back. 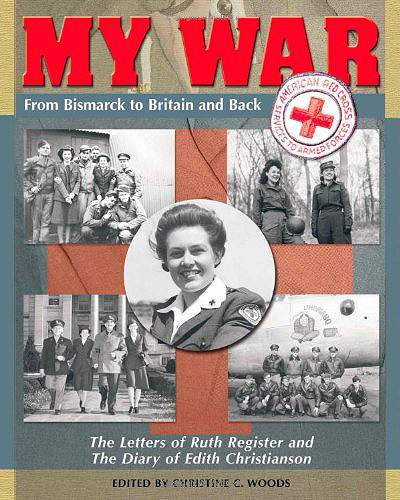 A book that reveals an overlooked aspect of service in the war. Ruth Register volunteered for the American Red Cross after her husband was killed in the Pacific. Her war story is a round trip ticket from North Dakota to Europe and back.

Here's a sample of what awaits you, Ruth's account of a typical day while stationed with the 492nd Bomb Group at North Pickenham, England:

Pebbles in her hand

“Every mission I sat on a high mound of dirt about a block from the central tower. Today I gather 12 stones, one for each bomber. As each plane lands, I drop a stone. Hopefully, all 12 will fall today.

I can see three planes on the horizon in formation. Good. Three are safe. The next formation is not in position. The lead plane is falling back. The other two are not circling the field in a holding position. They are coming directly into the landing path. Plane One has two engines feathered. Plane Two has just dropped 3 red flares - 3 wounded aboard. Suddenly it's very clear that both of them are going to land — one on top of the other! Plane Two with wounded aboard has priority. Plane One is out of gas.

I hear a voice screaming, "NO, NO, NO!" It's mine. I am convinced that if I scream loud enough they will hear me. I am yelling instructions. "Plane Two, pull up — pull up — pull up!!" Everything is in slow motion, with twenty lives in the balance. To be spectator helplessly watching twenty men's lives hang in the balance is terrifying.

It seems like forever before the last 15 feet and impact. The top plane flies into the tail of the bottom plane, which plunges nose down and crashes in an enormous black and fiery ball. Plane One is still airborne, fighting like a wounded bird trying to fly. "You can make it, you can make it!" I scream. Another eternity of slow motion. The bruised plane plummets down, belly first. Then slowly, slowly, the plane breaks apart in sections. It's as though an unseen hand had pulled every rivet out of it all at once. Figures come tumbling out and running in every direction. Nine I counted. The tail gunner didn't make it.

Tomorrow I will meet another mission.”

Scanning WWII dates related to Nurses and the Red Cross...