Japan in the Shadow of Big Science

Hardcover (335 pages)
Japan's failure to keep pace with Allied scientific and technological advancement ultimately led to its defeat in World War II, ironically through the dropping of American-developed atomic bombs. 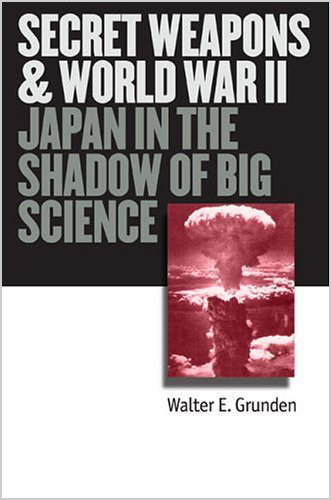 The atomic bomb. Rocket-propelled bombs. Jet propulsion. Radar. By failing to develop effective programs for such "secret weapons," Japan increased the probability that it could not triumph over its more advanced enemies. While previous writers have focused primarily on strategic, military, and intelligence factors, Walter Grunden underscores the dramatic scientific and technological disparities that left Japan vulnerable and ultimately led to its defeat in World War II.

Grunden's fascinating analysis of this fundamental flaw in the Japanese war effort seamlessly weaves together science, technology, and military history to provide an entirely unique look at a crucial but understudied aspect of World War II. Comparing the science and weapons programs of all the major combatants, he demonstrates that Japan's failure was nearly inevitable, given its paucity of strategic resources, an inadequate industrial base, the absence of effective centralized management to coordinate research, military hostility toward civilian scientists, and bitter inter-service rivalries. In the end, Japan could not overcome these obstacles and thus failed to make the transition to the kind of "Big Science" it needed to ward off its enemies and dominate the Far East.

In making his case, Grunden provides comprehensive coverage across a range of major weapons systems, including the most persuasive explanation yet developed for Japan's failure to develop nuclear weapons. He also assesses the failure of the Japanese navy to fully appreciate the combat utility of radar, describes the largely impotent "death ray" that remained under development until the last days of the war, and traces the expansion into jet propulsion technology that came too late.

Japan did, however, achieve one inauspicious success by developing biological agents capable of wreaking havoc in America's western cities. Grunden not only illuminates the program and the logic behind its success but also unflinchingly describes our own nation's complicity in the postwar cover-up of that program, raising issues that remain resonant and relevant today.

Drawing extensively upon Japanese as well as English-language sources, Secret Weapons and World War II is written with clarity and insight and a remarkable integration of sources from a diverse array of disciplines. The book makes a unique and significant contribution to the histories of World War II, Japan, science, and technology, chronicling another chapter in the endless pursuit for "ultimate" weapons.