Story of the Flying Bombs

Paperback (560 pages)
Anyone who had lived in London through 1944 and 1945 would be able to tell you with a shudder the ominous feeling down your spine as you heard a V-1 flying overhead. 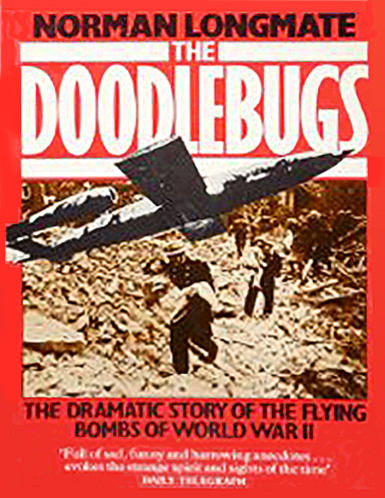 Anyone who had lived in London through 1944 and 1945 would be able to tell you with a shudder the ominous feeling down your spine as you heard a V-1 flying overhead, or the worry that instantly washes over you when you hear the double clap of a V-2 about to crash down from above. These two revenge weapons struck fear into the hearts of many people living in big cities in Western Europe in 1944-45 (and it was a reasonable fear, the V-2 that hit Deptford Woolworths killed 243 people), but they were two very different weapons.

The V-1 flying bomb was known as Fi-103 / FZG-76 during the test phase, it was relatively cheap to produce (under 1000RM), easy to construct so slave labour could easily do it, was produced by the Fieseler company for the Luftwaffe,, could be shot down and launched another mass evacuation of London. The V-2 medium-range rocket was known as the A4 during testing, it was expensive (over 20,000RM), sophisticated to produce so the use of slave labour increased it's unreliability, was produced by General Walter Dornberger and Wernher von Braun for the military from pre-Hitler days, couldn't be shot down and was a mystery to an uninformed public and scared government for a while. Both were notoriously inaccurate (especially with the British secret service feeding false information to Germany about impact positions), and both stopped firing after the Allied armies took over the launching devices.

Both of Norman Longmate's books about Nazi Germany's final two terrifying revenge weapons are well written and cross paths with each other as they compete for funding from the powers that be in Nazi Germany. Each tale of ambition and scientific curiosity without thought of the victims who suffered from firing as well as producing these weapons is a sobering lesson of the crimes that can be committed in the name of 'just doing your job'. Both books are simply divided into lengths went to in acquiring funds, producing and testing the V-weapons; the human and property losses, as well as success of various launchings in real situations, and finally the efforts went to by the scientists that produced these weapons to ensure their talents would go to the victor that they perceived was the best at the end of the war so their accomplishments could live on.

The description of the firings is easily understood and shows well the picture from both sides, the firing side and receiving side, which during the war no single person would have known or experienced. A full account of all the firing failures as well as successes is given, as are the losses of life, property and work hours due to stress, injury, time spent in the bomb shelter and assistance given to the clean-up afterwards.

The importance of both weapons during the Second World War seems quite small from a military perspective, as the V-1 and V-2 were relatively ineffective, but in terms of understanding the British home-front experience in London (as well as the French in Paris and Belgians in Antwerp) they are quite significant, as well as for understanding the reach of the Third Reich's technical achievement that outlived the Reich itself. The V-1 was experimented on by both the Americans and Soviets on submarines, eventually producing the KGW-1 Loon. More famously, the V-2 led to American Redstone, Jupiter, Saturn and Pershing rockets and Soviet R-1, R-2 and Scud missiles.