DVD 6-discs, Blu-ray
This must-have, powerful HBO miniseries takes you into the hellish heart of war like nothing else, following the men of Easy Company of the 101st Airborne as they take part in some of the most difficult battles of the European war. 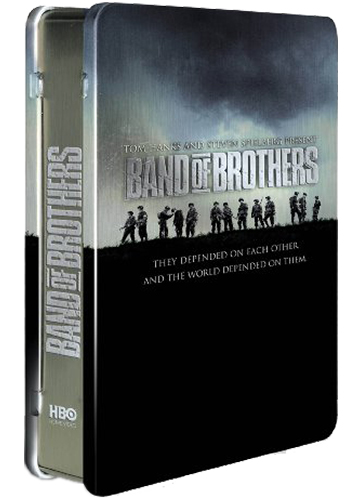 What makes Band of Brothers an essential WWII movie?

From Steven Spielberg and Tom Hanks, this haunting, powerful HBO miniseries takes you into the hellish heart of war like nothing else. Nominated for 19 Emmy Awards, and for good reason, it masterfully follows the men of Easy Company of the 101st Airborne, who took part in some of the most difficult battles in the European Theater, from the start of boot camp to the end of WWII.

The realistic, intriguing depictions of war are made even more real with short interviews with veterans of the 101st themselves before and after each episode. You'll actually feel like you've come to know these men personally, Dick Winters in particular.

Follow the men of Easy Company from the start of boot camp to the end of WWII. From Steven Spielberg and Tom Hanks, this haunting, powerful HBO miniseries takes you into the hellish heart of war. Nominated for 19 Emmy® Awards. 10 episodes plus an 80-min. documentary; 11-1/4 hours on 6 discs.

Stephen Ambrose, prolific chronicler of history, wrote Band of Brothers in part to renew "a commitment to democracy -- an understanding that freedom doesn't come for free." This point, of course, was tragically underscored just two days after the September 9 premiere of the miniseries.

An impressively rigorous, unsentimental, and harrowing look at combat during World War II, Band of Brothers follows a company of airborne infantry -- Easy Company -- from boot camp through the end of the war. The brutality of training takes the audience by increments to the even greater brutality of the war; Easy Company took part in some of the most difficult battles, including the D-Day invasion of Normandy, the failed invasion of Holland, and the Battle of the Bulge, as well as the liberation of a concentration camp and the capture of Hitler's Eagle's Nest.

But what makes these episodes work is not their historical sweep but their emphasis on riveting details (such as the rattle of a plane as the paratroopers wait to leap, or a flower in the buttonhole of a German soldier) and procedures (from military tactics to the workings of bureaucratic hierarchies). The scope of this miniseries (10 episodes, plus an actual documentary filled with interviews with surviving veterans) allows not only a thoroughness impossible in a two-hour movie, but also captures the wide range of responses to the stress and trauma of war -- fear, cynicism, cruelty, compassion, and all-encompassing confusion. The result is a realism that makes both simplistic judgments and jingoistic enthusiasm impossible; the things these soldiers had to do are both terrible and understandable, and the psychological price they paid is made clear.

The writing, directing, and acting are superb throughout. The cast is largely unknown, emphasizing the team of actors as a whole unit, much like the regiment; Damian Lewis and Ron Livingston play the central roles of two officers with grit and intelligence. Band of Brothers turns a vast historical event into a series of potent personal experiences; it's a deeply engrossing and affecting accomplishment.