Battle of the Bulge

DVD, Blu-ray
Though a little short on historical accuracy, this 1965 all-star Hollywood take on the is still very entertaining and is well remembered by everyone who watches it. 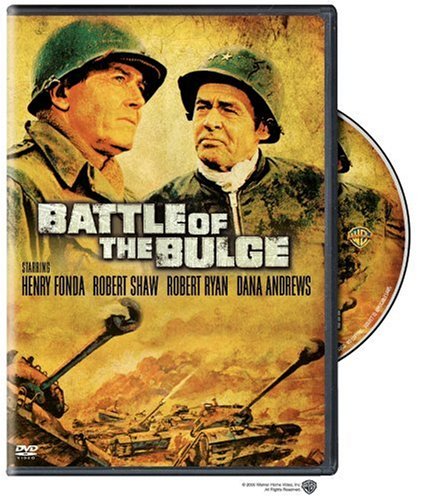 Nazi Panzer forces stage a last-ditch Belgian front offensive that could turn the tide of WWII.

This 1965 film stars Henry Fonda, Robert Shaw and Robert Ryan in a spectacular recreation of a crucial campaign. The German offensive in December 1944 became the basis for this all-star Hollywood take on the Battle of the Bulge.

Henry Fonda is an officer who predicts the assault, Robert Ryan and Dana Andrews are Army brass skeptical of his intuitions, and Robert Shaw (his hair dyed yellow and his eyes glinting with malice) is a German officer leading the tank attack. Shaw is certainly the most compelling thing about the film, especially in his philosophical debates with ambivalent underling Hans Christian Blech. Elsewhere, the movie jumps around to sidebar stories (cowardly James MacArthur becomes a leader, wheeler-dealer Telly Savalas falls in love) while messing around with the historical facts of the battle.

There are interesting episodes, such as the Malmedy massacre of American POWs and the Germans' use of English-speaking spies, but overall Battle of the Bulge has the feeling of having been patched together from different scripts. On the physical level, the movie comes up short, with the Spanish locations rarely suggesting the wintry misery of the battle, and the use of models and studio sets highly inadequate. A number of war films from this era are compelling on their own terms, but in the wake of Saving Private Ryan and Band of Brothers, this one looks antique. -- Robert Horton